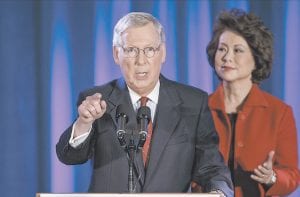 Senate Minority Leader Mitch McConnell joined by his wife, former Labor Secretary Elaine Chao, celebrated with his supporters at an election night party in Louisville. McConnell won a sixth term in Washington, with his eyes on the larger prize of GOP control of the Senate. (AP Photo/J. Scott Applewhite)

McConnell’s paltry approval ratings fed Democratic hopes of unseating the minority leader in a state where Democrats control the governor’s office and five of the six statewide constitutional offices.

But with Republicans aiming to control both houses of Congress, the 30- year Washington veteran focused on President Barack Obama’s even lower approval ratings in Kentucky and asked voters to “make me the leader of a new majority.”

“Tomorrow papers will say I won this race. But the truth is, tonight we begin another one, one that is far more important than mine. And that is the race to turn this country around,” Mc- Connell said in his victory speech, with his wife Elaine Chao, the former Labor Secretary, on one arm and GOP Sen. Rand Paul of Kentucky on the other.

“I don’t expect the president to wake up tomorrow and view the world any differently than he did this morning. He knows I won’t either,” McConnell added.

Grimes conceded before McConnell’s victory margin grew to 12 percent with 72 percent of the precincts reporting.

“This journey, the fight for you — it was worth it,” she told a disappointed crowd of supporters in Lexington. “ My hope is the message has been sent to Congress that we need to work to increase the minimum wage, to close the gender pay gap and bring good paying jobs back to the Commonwealth of Kentucky.”

Turnout was high for a midterm election even though most Kentuckians ended up disapproving of both candidates at the end of a two-year election cycle in which $78 million was spent, mostly on attack ads that were funded mostly by out-of-state interests.

But McConnell’s argument resonated with 36-year-old Jacob Mayes, who voted for him in Lawrenceburg, one of many small towns in Kentucky that gave the GOP an edge over Democratic votes from Louisville and Lexington.

“ Kentucky is going to benefit, especially if Republicans take the Senate. Being majority leader would be a good thing for us,” Mayes said. “Nothing against her, I just think he would be a better choice for us right now.”

Rocky Adkins, who leads the Democratic majority in the state House of Representatives, said Obama has hurt Kentucky Democrats.

“There’s no question that there’s been harm done. That’s been a bigger part of the race than really the candidates that are in the race themselves,” Adkins said.

Grimes was already fading in the polls when she refused to say whether she voted for Obama’s re-election, making it easier for McConnell to focus on the president’s unpopularity.

“I can’t say I was completely inspired by my Senate choice,” said James A. Savage, who teaches history at the University of Kentucky in Lexington and chose Grimes.

“I have no problem telling people who I voted for, unlike her,” Savage said. “She was not only Kentucky’s underdog, but the nation seemed poised to count her out time and again and yet she hung in against very long odds and very fierce, seasoned competition.”

McConnell faced one of his toughest challenges yet in Grimes, the 35-yearold Secretary of State and daughter of a state Democratic Party boss. Outside groups now freed by the U.S. Supreme Court to spend like never before joined the national parties in pouring money into the Kentucky as the Democrats tried to topple one of America’s most powerful politicians.

“She earned a lot of votes and she earned my respect,” McConnell said. “It took a lot of guts to take on a race like this. Because of the business we’re in it also meant she would take some heat. I admire her willingness to step into the arena and fight as hard as she did. We need more people who are willing to do that, not fewer.”

Both sides made it personal: Grimes attacked McConnell’s wife, former GOP cabinet member Elaine Chao, for serving on the board of a group that has funded anti-coal efforts. McConnell accused Grimes’s father of violating campaign donation laws for renting his daughter a bus at rates he said were below fair market value.

The dark public mood was captured by photographers when another voter gave McConnell a “thumbs down” sign as the senator cast his ballot.