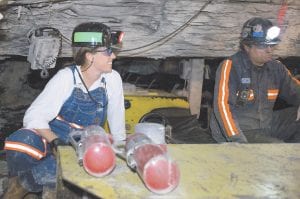 Kentucky Secretary of State Alison Lundergan Grimes, left, visited an underground coal mine in Floyd County on June 13, just hours before federal Environmental Protection Agency Director Gina McCarthy made comments on the cable-TV channel HBO that U.S. Senator Mitch McConnell hailed as evidence that the Obama administration is waging a war on coal. Grimes, a Democrat, is trying to unseat Republican McConnell in the November election. Both have pledged to support the coal industry.

The battle over which of Kentucky’s U.S. Senatorial candidates will do the most of eastern Kentucky’s struggling coal industry is continuing this week, with Democrat challenger Alison Lundergan Grimes touting her visit of an underground coal mine in Floyd County and incumbent Republican Mitch McConnell taking to the Senate Floor to blast EPA Director Gina McCarthy for statements she made on an HBO comedy show.

After watching coal being mined inside an MRM Mining operation at McDowell on June 13, Grimes spoke with miners and told them she is opposed to the Environmental Protection Agency’s proposed new rules on power plant emissions. As does McConnell, Grimes blames President Obama for not reining in the EPA and its newest director, Gina McCarthy, when it comes to protecting coal jobs.

“I don’t agree with what the president has done, his energy philosophy,” Grimes, Kentucky’s Secretary of State, told the miners.

Grimes also criticized Mc- Connell for not using his current role as Senate Minority Leader to do more for coal as it continues to lose ground to natural gas as the U.S. power industry’s fuel of choice.

“Mitch McConnell has had three decades to address the issues facing Kentucky, and he has not saved one coal job,” Grimes said. “He has not helped to make this state stronger in terms of how we’re going to move Kentucky — especially eastern Kentucky — forward.”

On Tuesday, meanwhile, Mc- Connell stood on the floor of the Senate to criticize McCarthy for what he said were anti-coal statements the EPA director made while she was a guest on HBO’s “Real Time With Bill Maher.”

McConnell was referring to a statement McCarthy made at the beginning of Maher’s show after she was asked about EPA’s proposed regulations on power plant emissions.

“Actually, EPA is all about fighting against pollution and fighting for public health,” answered McCarthy. “That’s exactly what this is. Exactly.”

McCarthy’s comments drew this response from McConnell on Tuesday: “The host asked her this question, quote: ‘Some people called it a War on Coal. I hope it is a War on Coal. Is it?’ After a moment of indirection, Administrator McCarthy conceded that a War on Coal is, quote, ‘exactly what this is ….”

McConnell told the Senate that McCarthy has refused his invitation to come to eastern Kentucky to convene a public hearing on the EPA’s proposed rules.

McConnell asked, “Why does Administrator McCarthy have the time to appear on HBO, but not to appear” on local television stations or talk to local newspapers about the proposed rules that he said “threaten Kentucky’s 20 existing coal- fired power plants while potentially putting thousands out of work?”

“It doesn’t appear that Administrator McCarthy is too busy to talk to some people, however,” McConnell added. “Imagine my surprise when I learned that she found the time Friday night to appear on an HBO late-night comedy show, where she admitted that the Obama Administration is in fact waging a War on Coal.”

EPA’s latest proposal could indeed lead to closures of coalfired power plants and mines, but the Obama administration insists it’s not meaning to wage a “war on coal.”

Purchia accused McConnell and others of being part of “a small group selectively editing (McCarthy’s) remarks to take them out of context and spur up their own agendas.”

“The administrator was referring to the Clean Power Plan when she said EPA is all about fighting pollution and fighting for public health, which is exactly what this plan is about,” Purchia said.

“Can’t be more clear: there is no war on coal. Clean Power Plan is about reducing pollution and fighting for public health,” she tweeted.

McConnell said Tuesday that if the EPA’s proposal is allowed to take effect, “the massive new regulations would prove the single worst blow to Kentucky’s economy in modern times— and a dagger to the heart of the Commonwealth’s middle class. Despite what they are called, the proposed restrictions on Kentucky’s coal-fired power plants amount to little more than a massive energy tax. And they will have a devastating effect on Kentucky.”

The Courier-Journal of Louisville reports that coal mining jobs in Kentucky have fallen to less than 7,500 in Kentucky after peaking at about 48,000 in the early 1980s.