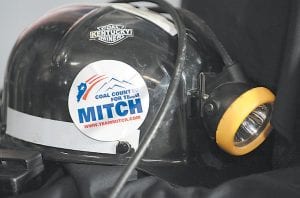 Sen. Mitch McConnell’s campaign says he launched his “Coal Country for Team Mitch” effort with stops in Hazard and Madisonville over the weekend. The Republican senator said he is a strong supporter of the coal industry and that he received support from coal miners in both locations. The cap and light shown above belong to the campaign. (AP)