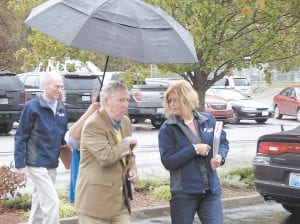 U.S. Senator Mitch McConnell walked under an umbrella held by a campaign assistant as he made his way into the Whitesburg Medical Clinic Monday. (Photo by Ben Gish)

With most polls showing a close race, U.S. Senator Mich McConnell started a three-day bus tour Monday that brought him to Letcher County to make his pitch to miners and their families with a little over two weeks left before the election.

In a short address to an enthusiastic audience at Mountain Comprehensive Health Corporation’s Whitesburg Medical Clinic, McConnell blamed President Obama and his energy policies for the loss of coal mining jobs in eastern Kentucky, framing the issue as an “us against them” mentality.

“This administration is full of people that went to Ivy League schools,” he said. “They look down their noses at us. The arrogance you’ve seen the last six years needs to be reined in.”

McConnell’s opponent, Alison Lundergan Grimes, counters that eastern Kentucky’s struggles have come during McConnell’s 30-year Senate career. She visited six eastern Kentucky counties over the weekend, but hasn’t returned to Letcher County since a quick visit in May. She has toured an underground coal mine and has been endorsed by the United Mineworkers of America. And earlier this year, she appeared on stage at a rally with former President Bill Clinton and about two dozen coal miners in Hazard before a crowd of more than 1,000 people.

McConnell has pledged that if he is re-elected he would slash the budget of the Environmental Protection Agency, which has issued a series of new emission standards that state officials say would prevent the replacement of the state’s aging fleet of coal fired power plants that, right now, provide about 90 percent of the state’s electricity. Grimes has also spoken out against the regulations, but said she is opposed to McConnell’s budget idea because it could force a government shutdown.

McConnell told the Whitesburg audience that “coal does have a future,” but that “we have to endure this crowd for two more years” before things can be changed with the EPA.

McConnell was accompanied by U.S. Rep. Hal Rogers and musician Jimmy Rose of Bell County, who performed his song “Coal Keeps the Lights On,” which has become a regional favorite. Rose, a former contestant on “America’s Got Talent,” has put “a face on this issue” of coal miners losing their jobs, McConnell said.

MCHC CEO L.M. “Mike” Caudill, who welcomed McConnell and Rogers to the clinic, told the audience that eastern Kentucky is “under a battle for coal rights we have never had before.”

Caudill cited cheap labor and poor safety regulations in other coal producing countries as being among the causes of the decline of eastern Kentucky coal as well as “overregulation here at home.”

“ We have to be one,” Caudill said. “… We can’t do it alone. We have to have help. The support they (Mc- Connell and Rogers) have for you is shown by them being here today.”

McConnell called on the audience to make sure their friends and neighbors get out and vote on November 4.

“ The question is, my friends, will they get to the polls?” he asked. “Will they vote?”