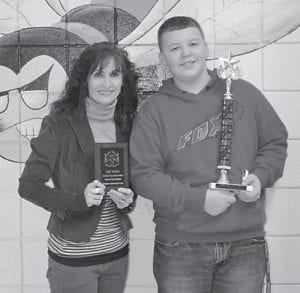 STATE CHAMP — Dalton McCown, a student at Whitesburg Middle School, is the state champion of broadcast announcing. His coach, Debi Sexton, received a plaque in recognition of coaching a state champion.

Whitesburg Middle School’s Dalton McCown is the state champion of broadcast announcing. In addition to this state title, he won regional titles in the category last year and this year. He brought home the title after the Kentucky High School Speech League’s state tournament March 14-16 at the University of Kentucky. He is the son of Tonya and Oscar McCown of Little Colley at Isom, and has a sister, Kaci.

The team won the regional title for the Appalachian Region for the third year in a row. Debi Sexton, who was given a plaque in recognition of coaching a state champion, coaches the team.