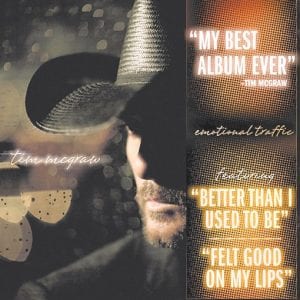 The cover of Tim McGraw’s ‘Emotional Traffic’ is shown above.

That ambition comes across most clearly in his music. On “Emotional Traffic,” his 11th studio album, McGraw continues to expand country music’s boundaries. That’s why, 20 years into his career, his music still sounds so fresh, even though a legal dispute with label Curb Records delayed the release of these songs, recorded in 2010.

McGraw’s range shows on the album’s first two hits. “Felt Good On My Lips” — also released against the singer’s wishes as a bonus track on last year’s two-CD Curb compilation “Number One Hits” — is buoyed by an infectious chorus and dynamic musical twists. Meanwhile, the thoughtful ballad “Better Than I Used To Be” finds a man pressing to become more responsible. It starts with quiet piano, and then builds to a crescendo that underscores the emotion of the lyrics.

McGraw’s progressive artistry also comes through on “Only Human,” a duet with sweet-voiced R& B singer Ne-Yo, and the cover of “One Part, Two Part,” originally written by Georgia soul singer Dee Ervin.

“Emotional Traffic” may contain two-year-old recordings, but for McGraw’s fans, it will shine like tomorrow’s sunrise.

CHECK OUT THIS TRACK: “The One That Got Away” counteracts country music’s usual small-town romanticism with a story about the successful person who “got away” — and drew the admiration and jealousy of those left behind. The dreamy, layered arrangement breaks country’s conventions just as imaginatively as the lyrics.