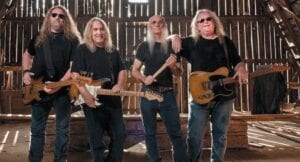 What better way to celebrate such a milestone than with one of Kentucky’s longest running and most popular bands?

Organizers for the series say they were already excited about their lineup before the Kentucky Headhunters became a possibility thanks to MCHC’s involvement.

“We had half the lineup in place, including two other Grammy winners, before we got an unexpected opportunity to raise our budget for the opening night,” said Steve Ruth, who helps with the local concert series.

The opportunity came when Mike Caudill, CEO of MCHC, said he’d like to do something special musically for MCHC’s 50th anniversary. Local Levitt AMP organizers didn’t hesitate to take him up on his offer.

“MCHC has been with us since the beginning providing many levels of support,” said Valerie Horn, director of Cowan Community Center. “They connected us to our presenting sponsor, Appalachian Regional Healthcare.”

She added: “MCHC has been dedicated to the overall health of our community for half a century. They’ve supported the Farmer’s Market and been a driver for CANE Kitchen. We’re honored they wanted to celebrate with a Levitt AMP concert!”

Originally formed as the Itchy Brother in Glasgow, Kentucky in 1968 and continuing under that name until 1982, the group began performing as the Kentucky Headhunters in 1986. Today’s lineup includes original Kentucky Headhunters members George Martin, Doug Phelps, Fred Young and Richard Young.

After the Headhunters show opens the Levitt AMP series on Thursday, July 22, that show will followed by nine consecutive Thursdays of free, live music ending with the Mountain Heritage Festival on September 23.

Expect good food, including a community dinner, activities for the kids and adults alike, and public recognitions for this special fiftieth birthday party event. Of course, a great concert is at the center of the festivities .

The 10 Levitt AMP events take place at the Mountain Heritage Stage in Whitesburg each Thursday beginning at 5 p.m., with the Whitesburg Farmer’s Market and music starting at 6 p.m. Headliners begin at 7p.m. Rain location is the Appalshop Solar Pavilion, also in Whitesburg.

The Levitt AMP Whitesburg Music Series is supported in part by the Mortimer & Mimi Levitt Foundation, a private foundation that partners with towns and cities across America to activate underused public spaces, creating thriving destinations where people of all ages and backgrounds come together through the power of free, live music. In 2021, free Levitt concerts will bring a broad array of musical experiences and high-caliber artists to communities nationwide. Learn more at levitt.org.