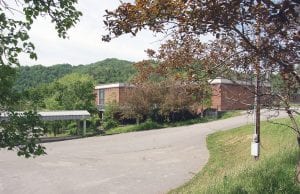 A portion of the old Whitesburg High School campus is seen earlier this week.

The Letcher County Board of Education has accepted a bid from Mountain Comprehensive Health Corporation (MCHC) for the purchase of the Whitesburg High School campus.

After accepting MCHC’s offer of $427,673 during a special board meeting on May 7, the proposal was submitted to the Kentucky Department of Education (KDE) for approval. As of Tuesday afternoon, Letcher County Public Schools Supt. Tony Sergent had not received notification from KDE as to whether or not the proposed amount had been okayed.

MCHC Chief Operating Officer L.M. “Mike” Caudill said a feasibility study will be conducted during that 30-day period to include “detailed inspections” to determine the conditions of the English building, science building, annex building and gymnasium. If the findings of the feasibility study show that the property doesn’t meet MCHC’s requirements, the nonprofit corporation can decline purchasing the property.

Caudill wrote in the bid proposal that he and the MCHC board of directors intend for the property to once again be a vital asset to Letcher County.

“We certainly would like to have a positive impact on downtown revitalization,” said Caudill.

The Whitesburg clinic, Caudill said, is in need of space to expand services and purchasing the school hill property will provide the opportunity for some administrative offices to locate to the WHS campus, creating space at the clinic. In addition, plenty of space will be left at the School Hill property for future MCHC expansion projects.

The nonprofit corporation isn’t seeking grant funding to buy the school property, but Caudill said MCHC will apply for grants to assist with costs associated with renovations and future changes.

“We will renovate what we need as we need it and look to partner with other organizations toward improving other areas of the campus,” said Caudill, who is taking suggestions from the community regarding what to do with the gymnasium and other portions of the buildings that MCHC will not occupy.

Roy Crawford, owner of RR Crawford Engineering, also submitted a sealed bid for the school property. Crawford, who didn’t have definite plans, had asked representatives with Southeast Kentucky Community and Technical College and Appalachian Regional Hospital if either would be interested in leasing the property from Crawford.

In the unlikely event that Crawford’s bid of $151,515 was accepted by the school board and KDE, Crawford said he would have called the Benham Schoolhouse Inn to see if the owners would like to do something similar in Letcher County like was done in Harlan County.

Crawford said he is glad that MCHC submitted a bid.

“I think that it is a really terrific price that Mountain Comp got it for and I wish them the best,” said Crawford.

Sergent had shown the property to a couple dozen people in nearly two years. Several individuals had ideas of what to do with the property, but needed grant funding to implement plans, Sergent said.

In December 2013, the board agreed to cut off electricity to all four buildings, which total 75,000 square feet. Prior to the board’s decision, the school district had spent about $45,000 each year in electric bills, in addition to fees associated with custodial services and maintenance. The board is still paying nearly $29,000 annually to insure the property.

“We’ve been looking to sell this thing for a long time,” said Will Smith, chairman of the school board. “Actually, we’ve probably been out $427,000 in the past 10 years. It’s a drain on the school system and we do need to get rid of it.”

Sergent said the district spent between $80,000 to $100,000 for eight or nine years on bills pertaining to the old WHS campus.

“We tried to do some security because the vandalism was getting bad,” said Sergent. “It is costing us money and the longer it sits there the worse it is going to be.”

Assistant Letcher Schools Supt. Twyla Messer has been walking through the campus weekly and said the buildings are still in fairly good shape.