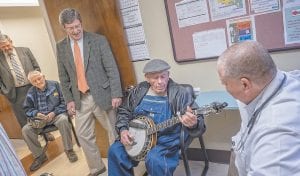 Whitesburg-based Mountain Comprehensive Health Corporation is working on a plan that would allow some of its patients who receive Medicaid under Obamacare to volunteer at its clinics for 20 hours a week in order to meet new regulations proposed by Governor Matt Bevin.

While the federal government still has not acted on Bevin’s proposal that Kentucky be permitted to require some Medicaid recipients to either work 20 hours a week, enroll in school, or get job training, MCHC officials are already making plans in case the Centers for Medicare & Medicaid gives its approval.

“We need to be innovative,” said Dr. Van Dr. Breeding, chief of staff at MCHC’s Whitesburg Medical Clinic. “We want to (have) a program when that waiver starts.”

The issue arose during a panel discussion in Whitesburg on April 6 that included Breeding; Ben Chandler, president and CEO of the Foundation for a Healthy Kentucky, MCHC Chief Executive Officer L.M. “Mike” Caudill, and three patients whose lives were saved after they were examined by MCHC doctors after qualifying for Medicaid under new eligibility requirements offered by Obamacare, officially known as the Patient Protection & Affordable Care Act (ACA).

Chandler, a former member of the U.S. House of Representatives now in his first year with the foundation, was invited to participate in the discussion and tour MCHC clinics in Whitesburg and Leatherwood after he reached out to Dr. Breeding after learning about the “Country Doctor of the Year” award Breeding received recently.

During a question and answer session, patients Barry Linville, who nearly died because of high blood sugar, and Mike Taylor, who has severe black lung, told Chandler that in order to keep their health insurance they would be open to MCHC’s proposal to allow them and other seriously ill Medicaid patients to meet the 20-hour work requirement by counseling other patients or calling patients to remind them of their appointments.

Bevin has said that if the federal government doesn’t approve his recommended changes the state will withdraw from the expanded Medicaid program, a move that would end health insurance coverage for Linville, Taylor, and hundreds of other Letcher County residents.

“Why would a politician in Kentucky say ‘I don’t want that for my people,’” Chandler asked. “And people still vote for them?”

Dr. Breeding and Caudill told Chandler about some of the dramatic improvements the ACA has brought to patient care at MCHC:

• With funding through Obamacare, the Whitesburg Medical Clinic has been able to set up an I.V. room that Dr. Breeding and Caudill estimate has saved the federal and state governments more than $500,000 in money that would have been paid to hospitals.

• Seventy-three percent of MCHC’s patients over 60 years old have undergone colonoscopies — many of them life-saving — provided to them under the provisions of the ACA.

“It saved my life,” said Dr. Breeding, explaining to Chandler that the colonoscopy paid for under his ACA plan found that he had early signs of colon cancer. “I’ve become a big spokesman for this.”

Under the care MCHC has provided Linville since he qualified for Medicaid, he has lost more than 100 pounds, from 466 pounds to 350 pounds. With Linville’s participation in the MCHC-financed Farmacy program, which helps qualified patients buy fresh fruits and vegetables at the City of Whitesburg Farmers Market, Linville’s blood sugar level has fallen from an average of 14, which is dangerously high, to 6.8.

“I started eating stuff I never ate before,” said Linville, who told Chandler his favorite vegetable is now okra. “I eat it raw. You get used to it, you’ll be surprised what it does for you.”

“It’s just a matter of teaching new things to people they’re not used to,” said Dr. Breeding, adding that resources provided under the Affordable Care Act have permitted MCHC to focus on preventive care through food, diet and exercise.

Dr. Breeding said that as a registered Republican himself he wishes it were easier to convince GOP officials in Washington and Frankfort of the importance of the preventive care that is a large part of the Affordable Care Act.

“They don’t see the benefits of teaching people how to get healthy,” he said.

Taylor, who developed black lung disease while driving a coal truck, said Gov. Bevin needs “to try to live on $1,070 a month” and pay his electricity bill and other expenses before he goes through with the work requirement and his plan to make Medicaid patients pay monthly premiums of $1 to $37.50.

“We didn’t ask to be sick,” Taylor told Chandler.

“ What the governor doesn’t understand is how sparse they’re living,” Dr. Breeding said of the Medicaid patients. “Thirty-five dollars may not be anything to someone like me, but to them it’s everything.”

Breeding said that with Bevin’s plan still pending and a move by the Trump White House and Republican led Congress to dismantle Obamacare, “I fear for my patients’ ability to retain their good health.”

Chandler, a grandson of former Kentucky Governor, U.S. Senator, and Major League Baseball Commissioner Albert B. “Happy” Chandler, helped create the Foundation for a Healthy Kentucky when as Kentucky Attorney General he won a $45 million in a suit from the Anthem insurance company and helped see to it that the money was used to create the foundation in 2001.

Chandler is trying to raise people’s awareness of the foundation, which he says has one goal only — “to contribute to the better health of our people.”

“I have yet to meet a person who wants health care if they can have health,” he said.

He said his visit to Whitesburg and Leatherwood last Friday was an eye-opener.

“I didn’t realize all this was going on here,” Chandler said. “It’s just wonderful.”