MCHC working to get historical marker for Scotia miners 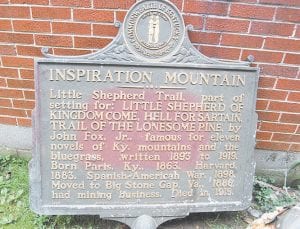 The Kentucky Historical Society has approved the placement of several historical markers in Letcher County over the years. The one pictured here was vandalized and is in storage until it can be repaired. Mountain Comprehensive Health Corporation of Whitesburg is working to get a marker erected to honor the victims of the Scotia mine disasters in 1976.

The respiratory clinics of Mountain Comprehensive Health Corporation recently submitted an application to the Kentucky Historical Society to have an historical marker made in honor of those who died during the Scotia mine disaster in 1976.

“It’s something that needs to be remembered in a respectful way and needs to not be forgotten,” said Mike Caudill, chief executive officer of MCHC. “It’s a tragedy that affected the lives of so many people.”

If approved by the Kentucky Historical Society, the marker will be placed near the entrance to the Scotia Mine off of Highway 119 at Ovenfork.

Caudill, who was present at the mine site after the two fatal explosions, said if possible, the marker will be revealed on March 9, the 34th anniversary of the first explosion in which 15 men died at the 2 Southeast Main area of the Scotia Mine.

The first explosion is thought to have originated in the mine when an electric spark from a locomotive, powered by batteries, caused methane to ignite. All five of the mine entries were affected by the explosion.

“I’ve always felt that more needed to be done to recognize those people who lost their lives in those days,” said Caudill.

The first side of the marker will say: “On March 9, 1976 methane gas explosions took the lives of 26 coal miners and federal mine inspectors in the Scotia Coal Mines located near here. The bodies of the 11 men killed in the second explosion were never recovered. The Scotia Mine disaster is one of the worst mine disasters in U.S. history.”

The marker will also include the information that the sign was donated by the MCHC respiratory clinics of eastern Kentucky.

“We’re doing this because we want to make sure future generations won’t forget about those people that lost their lives on those tragic days,” said Caudill.

If approved by the Kentucky Historical Society the marker would be the 11th marker to be placed in Letcher County.

A marker located two miles east of Whitesburg at Ermine at Jct. KY 119 and 2034 is in honor of an early settler. “Archelous Craft of Wilkes Co., N.C., was with small band of pioneers who immigrated to Upper Kentucky River Valley in 1804. Born December 25, 1749, in Roanoke River area, Craft was a veteran of Revolutionary War; he fought in battles of Hanging Rock and Eutaw Springs. He died November 8, 1853. His unmarked grave is three miles north of Craft’s Colly. Presented by Craft Family Reunion Association.”

Located south of Whitesburg on US 119 is a marker for Little Shepherd Trail.

A marker is located on US 23 in Jenkins with this inscription: “Land bought by John C.C. Mayo and sold to Consolidation Coal Co. to develop town and coal mines. Coal company laid out streets and built houses, stores, hospital, churches, and schools. Town named for George C. Jenkins, a promoter and Baltimore banker. The railroad reached Jenkins ca. 1912. With Consolidation’s 14 tipples, Letcher Co. was largest coal producer in Kentucky in 1916.”

A marker for Kingdom Come is located near KY 931 with this inscription: “Early settlers, ca. 1816, were deeply religious and Godfearing. They chose a name for this beautiful and fertile valley from the words in ‘The Lord’s Prayer.’ History of this area is typical of that of many communities along the creeks and hollows where descendants of the first settlers still live. It was immortalized by John Fox, Jr., in Little Shepherd of Kingdom Come.”

In front of the Letcher County Courthouse is an historical marker with this inscription: “Francis Gary Powers and the ‘U-2 Incident’ catapulted activities of the United States into world view. This Burdine native, with other pilots directed by CIA, flew U-2’s (high altitude jet gliders) over Russia, photographing missile and industrial sites and nuclear tests. On May 1, 1960, when his plane was disabled 1300 miles over Russia, Powers parachuted to safety. Francis Gary Powers, 1929-1977 – Taken prisoner, Powers stated his compass had malfunctioned on a weather flight. Finding film intact in plane’s wreckage, the Russians told him he would stand trial for espionage. “Sentenced to ten years imprisonment, Powers was released in 1962 in exchange for a Soviet spy. Later decorated by CIA. Died in civilian helicopter crash.”

A marker located near Isom, four miles south of Jct. KY 15 on KY 7 is in honor of a pioneer ancestor.

A marker for Pound Gap is located at Jenkins near US 23 and US 119.

A marker for Scuttle Hole Gap Road is located near Whitesburg, seven miles south of Jct. KY 15 on KY 931.

“Indians or buffalo probably were the first to follow this gap and make a trail across Pine Mountain. First white settlers, about 1800, made trail into treacherous wagon road, their only route to Virginia for supplies of flour, salt, and sugar. Called Scuttle Hole Gap, meaning deep gorge through cliffs. Trail goes 7 miles from here into the Cumberland River Valley.”

Caudill encourages other businesses and organizations in Letcher County to apply for historical markers that are significant to the county.

“There are many things that need to be permanently memorialized so we don’t forget and also for points of interest for people who visit the county,” said Caudill.