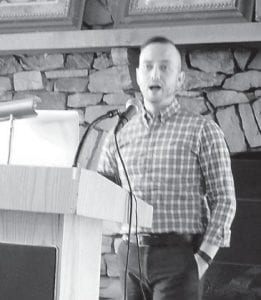 MTM offers marketing and client services to organizations and businesses across Appalachia and beyond. MTM is governed as a creative cooperative that encourages talented professionals to own the company they are helping to build. It is an equal opportunity employer which hires local professionals and seeks work from outside the Appalachian Mountains to minimize local competition. Jeremy shared with members two recent videos created to promote The Heritage Kitchen in Whitesburg and Pine Mountain Settlement School, located in Harlan County.

McQueen was born and reared in the foothills of Appalachia. He’s a native of Jackson County, and a graduate of Berea College and Eastern Kentucky University. After earning his master’s of science degree from EKU in December 2010, Jeremy married his wife, Rebecca, and together, they decided to leave the Commonwealth. After two and a half years, circumstances brought them back to Kentucky.

In August, 2015, Mc- Queen visited Whitesburg for the first time since college. He was interviewing for the position he has held since then with Mountain Tech Media.