McRoberts man back in jail 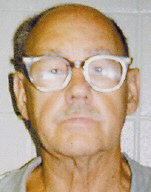 trouble with the law again, nearly 20 years after he was charged with operating one of the largest chop-shops east of the Mississippi River.

Vernon Andrew Mullins, who police say is in his seventies, was arrested last week after a search of his home at Wintergreen Drive netted nearly six ounces of cocaine, a large amount of dynamite, and cash.

The search was conducted June 18 by the Kentucky State Police and the Letcher County Sheriff’s Department. The KSP’s Hazardous Material and Device scene.

Mullins was arrested by state police after the search and lodged in the Letcher County Jail, where he remains on a $25,000 cash bond.

Charges against Mullins are pending in state court at this time. However, federal authorities may assume the prosecution of the case because of the presence of explosives during an illegal drug operation.

Mullins could be sentenced to a term of 25 years to life in prison if he is convicted of the drugs and explosives charges.

The sheriff’s department and state police will meet with Letcher Commonwealth’s Attorney Edison G. Banks II to determine how the prosecution will proceed.

Mullins was involved in a highly publicized case that began on October 24, 1987, when local, state and federal authorities searched property Mullins controlled at Band Mill Hill in McRoberts and found $5 million worth of stolen trucks and equipment.

Mullins served time at a federal prison hospital in Missouri after being convicted in U.S. District Court in Pikeville on charges related to the chop-shop operation.

The case against Mullins is remembered in part because the lead investigator was Mark Putnam, the disgraced Federal Bureau of Investigations agent who pleaded guilty to murdering a 27-year-old Pike County woman in 1990 in a crime of passion.

Putnam was transferred to Florida a year after busting Mullins, but returned to Pikeville frequently as the case against Mullins and two other defendants progressed. In June 1989, Putnam, who was then 29, strangled 27- year-old Susan Daniels Smith after Smith told him she was pregnant with his child.

The murder was the subject of a book, Above Suspicion, written by former Wall Street Journal reporter Joe Sharkey and published in 1993 by Simon & Schuster of New York. The book was adapted into a made-for-TV film in 1994 entitled “Betrayed by Love.”

Putnam was released from prison in 2000 after serving a 10- year term. His wife, Kathy, died of complications from alcoholism in 1998.