Details of 1947 slaying came as a shock to many 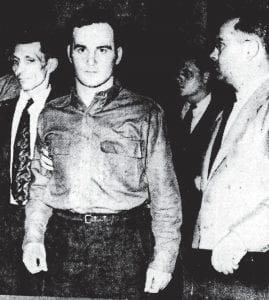 ACCUSED OF MURDER IN 1947 — Suspect Jasper Nease, 21, of McRoberts was photographed during a court appearance in the weeks after Nease and two other men were charged with murdering an exparatrooper from Louisville. A Letcher County physician and several local police officers played a major role in solving the crime, which shocked many. (Photo courtesy The Courier-Journal of Louisville)

This week 70 years ago, in what The Mountain Eagle termed “one of the worst crimes committed in this section in the last decade,” 21-year-old Jasper Nease of McRoberts and two other soldiers who escaped with him from the stockade at Fort Knox, were charged with murder after the partially bound body of former paratrooper Vernon Hodge of Louisville was recovered March 23 in Perry County from the North Fork of the Kentucky River, into which he had been thrown near Viper.

In its Thursday, March 27 edition, The Eagle reported the recovery of Hodge’s body followed a search of the river that was touched off Saturday afternoon, March 22, after the confession of McPeak, who had been taken into custody by officers with the Virginia Highway Patrol.

The arrests of McPeak and Workman were made possible after an alert Dr. Adkins spotted Hodge’s dog tags on Sandlick Road near Whitesburg. Recalling that he had read about Hodge’s disappearance the week before, Dr. Adkins called Sheriff Combs, whose search of the scene with Deputy Short turned up a letter addressed to Workman, who was arrested by West Virginia State Police.

Gose, the county jailer, was one of three officers who arrested Nease on Amburgey Creek in Knott County, near the Carr Creek Church, after officers had trailed him through the woods for many miles.

Before Nease was apprehended, his father, Brent Nease, and another McRoberts man, 23-year-old Eugene Scott, 23, were arrested on a charge of auto theft after they had been seen driving the automobile stolen from the murder victim. Hodge’s Packard coupe, which had been crudely repainted from yellow to black, was recovered by Chief Belcher and Patrolman Adkins, the two Neon officers.

According to Belcher, Brent Nease tried to sell the car to one of the chief’s helpers after telling the man the auto was a “hot car, I mean hot.”

In a signed confession, McPeak talks about his participation in the murder of Hodge and the time he and the other two suspect spent in Letcher County. Following are parts of that confession:

“The day we left camp (at Fort Knox, where the three soldiers were Army prisoners) we walked all night and all the next day up to about 6 p.m. Thursday, March 13, 1947. On the way they (Nease and Workman) wanted to get a car some way to get home in. I told them we would get picked up sooner that way.

“We hit a highway on some little place at forks of the road (four-way intersection). That is where we started hitchhiking. This ‘39 Packard you were talking about stopped and I thought it was a one-seated car. We decided to split up if it was a one-seated car. It was a convertible coupe. The other two boys with me were Jasper Nease and Herbert Workman, who were fellow prisoners at Fort Knox.

“I didn’t get into the car at that time. They pulled out and went down the road about 150 yards and stopped. … They stayed down in a field about 10 or 15 minutes, then backed the car into the highway … and headed back toward me. … They blew the horn for me and I went over to the car and … Nease said, ‘Get in. Don’t be scared.’

“I got into the front seat beside Vernon Hodge. Nease was driving. Workman was holding “the gun in the back seat. We pulled out and Nease made Vernon Hodge tell him the route to Harlan, Kentucky. We got into Harlan after midnight March 14, 1947. Vernon Hodge was still with us. He was uninjured at that time.

“Between Louisville and this point, Nease and Vernon Hodge changed clothes with each other by force. This was about nine or 10 miles from Louisville. I didn’t know the routes. He just told Nease where to turn at and everything.”

“At the time Nease and Vernon Hodge changed clothes at the point near Louisville, Hodge tried to get Nease to let him go, say- ing that he would sign a check that he had and give it to him ($12.97). He signed the check so Nease would give him the wallet back. We got into Hazard, Kentucky, about 4 a.m. Friday. We took route 15 out of Hazard to Jeff, about six miles from Hazard, turned to the right on Kentucky No. 7 to a place called Blackey. Between that intersection and Blackey was where Hodge was gotten rid of …

“He was tied up, feet, hands, and eyes. I tied his hands but they were not tied tight, for when we throwed him into the water they were loose. … We untied his feet and he walked from car to the river. Nease said “We are going to leave you sitting here.” When we got to the river we tied his feet back up. We threw him into the river immediately after tying his feet back up. His hands were free He took the two handkerchiefs off of his eyes and mouth and started hollering for help. This was about 5 a.m. Friday, March 14, 1947.”

“When I left the river, Nease and Workman were both saying, ‘Come to the bank, we’ll help you.’ I heard Hodge hollering when I got back to the car, calling for help. After Workman and Nease got into the water we heard no more hollering. When they came to the car, both soaking wet . . . Workman still had the gun when they came back to the car. Nease drove the car and Workman pulled his clothes off in the back seat.” WENT TO NEASE’S AUNT “From here we went to Nease’s aunt (Mrs. W.R. Sexton) living on Sandlick Creek. That is where we stopped and Nease and Workman and Nease’s brother, Andrew; sister and all of her kids got in the car and went to look for their mother and father. I stayed at this aunt’s house while they were gone. She fixed us something to eat. This was Friday, March 14, 1947.

“They couldn’t find his father and mother … and came back to their aunt’s house. We all three went up to Nease’s mother’s house at McRoberts on the same day. … Saturday morning we went to his sister’s house at Carbon Glow. Sister’s name was Ruby. Saturday morning Nease painted the left rear and right front fenders. Workman painted the left front fender. I didn’t paint any.

“Hodge’s dog tags (Army identification) was on the key ring. Nease got rid of it somewhere around his mother’s house.”

“As far as I know the carbine we took from the guard was only fired twice, at two rabbits between Fort Knox and the road where we started hitchhiking.

“ We stayed around Whitesburg Saturday, Neon, Fleming, McRoberts on Sunday and up at 8 a.m. Monday. Workman and I started hitchhiking from McRoberts, coming to Virginia. We walked from McRoberts to Pound, Virginia. We caught a ride in Pound with a preacher that lived at Coeburn and rode with him to Coeburn. He let us off there. We started hitchhiking and got into Abingdon about 2 or 3 in the afternoon of March 18, 1947.

“Workman, Henry and I walked through the fields all the way to where my mother and father live on the Jackson farm at Dublin, Virginia. We spent the night there March 19, 1947. Left about 10 Thursday morning, coming back to town and intending to go to Michigan. Workman, Henry and I came out to the field about a mile from home when Workman headed off toward Route 100, saying he was going back into West Virginia. This was about 10:30 a.m. Thursday. I haven’t seen Workman since.

“We (Henry and I) came through the fields all the way from home to Pulaski. I went straight to my brother’s house out on Thorn Spring Road, Dr. Smith’s farm. I was there just a few minutes when the sheriff ’s department picked me up.”