McRoberts school may be shut down, Jenkins board says 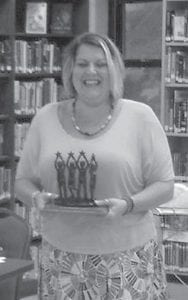 Burdine Elementary School teacher Amanda Anderson was honored as “Teacher of the Year” in the Jenkins school system.

After years of declining enrollment, the doors may soon close at McRoberts Elementary School.

At the June meeting of the Jenkins Independent Schools Board of Education, board members discussed the future of McRoberts Elementary and without exception, all expressed the belief that with current enrollment at 34, McRoberts is no longer economically viable.

All four board members who attended the meeting agreed it is not possible to continue to operate the McRoberts Elementary at current enrollment rates. Laura Reevis was not present. The board has scheduled a special meeting to allow public comment on Monday, July 1, at 6 p.m. at the Jenkins Middle High School library.

Board Vice Chairman Tracy Goff told the board Monday evening that in light of the current economic situation, it was time for the board to have a serious discussion about the future of McRoberts Elementary.

Goff mentioned meetings held with McRoberts residents several years ago when both the school system and the community made a commitment to keep the school open if enrollment could be kept at a decent rate. Goff said that for several years, enrollment got up well over 50 but has now fallen to the point that the cost per student is now unsustainable. Goff said the sharpest decline has come within the last three years, with enrollment at around 40 last year dropping to a low of 34 for the coming year.

Board Chairman Durward Narramore estimated that it would cost the system between $200,000 and $250,000 to keep the school open for another year. District Finance Officer Candala Gibson said the actual cost would probably be higher. Narramore said with that in mind, and since the General Assembly has shown no tendency to help with funding in such cases, the question has to be asked if McRoberts has the population needed to keep enrollment at a feasible level.

“Do we commit funds that we could use to make it more equitable for everyone in the system?” asked Narramore. “That’s where we are.”

Board members Pauline Sexton and Eileen Sanders, who attended McRoberts Elementary, both agreed that the cost is not sustainable for the number of students. Sexton said she is always sad to see any school close, but having worked for more than 30 years in the Jenkins System, she also understands the numbers, both in the overall financial picture and the probable loss of another teacher due to state laws that specify the number of staff by the number of students. She said that grouping several classes together under one teacher would do students and teachers a disservice.

Eileen Sanders, a retired librarian from the Jenkins system, told the board its has done all it can to work with the community and said that although it pains her, it would be fiscally irresponsible to the taxpayers to continue to operate the school at the low enrollment level. She also said it would be better for the students to have the school close.

Superintendent Deborah Watts said that transportation would not be a problem since students from McRoberts are already transported to the Jenkins Middle High School and promised that every child from McRoberts will be picked up. She added that it will be no problem to integrate the McRoberts students into classes at Burdine Elementary. Narramore then said the board has a decision to make and suggested the special meeting next Monday to give taxpayers an opportunity to give their opinions before the board takes action.

In other business, Burdine Elementary teacher Amanda Anderson was recognized as Teacher of the Year. Superintendent Watts praised Anderson for her enthusiasm and love of children and said that Anderson had been willing to go above and beyond in every aspect of her teaching. Anderson thanked the board and said that teaching was much more than just a job to her and she felt blessed to be able to teach, especially in her home district.

“This is like getting a Grammy,” said Anderson. “People can go lifetime without being recognized.”

Watts told the board that teachers are preparing for training with Advance Kentucky and said that Advanced Placement teachers will do a second higher level training as well. She attributed the Advance Kentucky training with the increase in testing scores and said the staff will be looking at the comprehensive plan soon. Watts said that cleaning at Burdine Elementary is nearly complete and is ongoing at the the middle high school and added that she will have a complete list of all hires for the July meeting.

District Finance Officer Gibson told the board the current General Fund balance stands at $450,242.43. She added that she will soon meet with the auditors to begin work on the coming year’s audit.

With a number of staff members on vacation, Superintendent Watts gave the report for the elementary schools. She told the board that “Meet the Teacher Nights” will be scheduled for Burdine Elementary before school starts and said the 21st Century Summer Camp has gone very well. Middle High School Principal David Lee told the board he is working on schedules and plans to meet with Dual Enrollment students soon. Lee said he is very pleased with the Dual Enrollment Program and is working in conjunction with the University of Pikeville.

Lee said End of Course testing went well for middle high school students despite problems with the ACT servers. He said that the number of students meeting benchmark in the four core subjects was good and added that teachers will use EOC scores in planning interventions with those students who did not meet benchmark.

Board Chairman Narramore said he is satisfied with the progress Jenkins students made over the previous year and added that more than $1 million in scholarships was offered to the 21 scholarship eligible students out of the graduating class of 41.

Technology Director Damian Johnson reported that he has been working with Micro Tec (InterMountain Cable) to repair TV cables within the system. Johnson said the cable television company fixed all the cables at no charge to the system. Johnson also said he is working to integrate new computers from Data Seam into the system and will spend a good deal of his time for the foreseeable future installing Imaging software. He said the state’s E-Rate Offer for the coming year (E-Rate is state aid for all electronic media including telephones, computers and Internet, TV, etc.) is $69,199.39 and has been accepted. Johnson said he just returned from the Eastern Regional State Technology Directors Conference and it focused heavily on integratfelony ing handheld devices into classrooms.

• The board voted to include flood insurance for Burdine Elementary in its insurance plan with People’s Insurance.

• Overall attendance for the year stood at 90.6 percent.

• The board re-appointed Eileen Sanders as Legislative Contact Board Member Representative.

• The board approved the Kentucky Valley Educational Cooperative contract for milk and bread.

• The board approved the fidelity bond and bond depository.

• Rates for classified substitutes were set at $7.50 per hour.

• The board approved dropping wrestling as an extracurricular activity and adding archery.

• Superintendent Watts told the board that there will only be enough funds to hire one school nurse for the coming year.