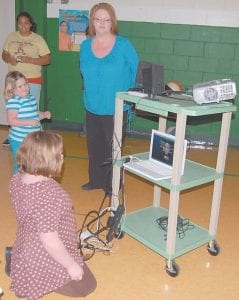 Students at McRoberts Elementary School were given the opportunity to speak with one of their favorite authors during a video conference held in the school’s gymnasium Tuesday afternoon.

“It was really cool,” said Matthew Jessey, a sixth-grade student.

Jessey said the session helped him to learn more about Stine, including that the first scary book the author ever wrote is titled “Welcome to Dead House.”

“I didn’t know about some of the older books he had written,” said Jessey.

Gracie Duncan, a third-grade student, said it was her best day of school.

“I finally got to meet an author,” she said. “I learned that he likes to write funny books and his son doesn’t like to read his books.” 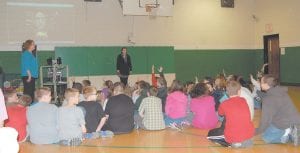 Students at McRoberts Elementary School raised their hands to ask questions to “Goosebumps” author R.L. Stine, who was talking with them via the Internet. Stine’s image is seen on gym wall at upper left of photo. (Photo by Sally Barto)

Students could easily view Stine, who has been called the “Stephen King of Children’s Literature,” as his image was projected largely onto one of the gymnasium walls. Students who asked questions stood in front of an Apple laptop and looked directly at Stine while they asked him questions.

“This is so much fun,” Stine said from his apartment in New York City. “I get to come to your school and I don’t even have to wear shoes.”

Stine answered several questions from the group of about 62 students who are in kindergarten through sixth grade. Jessey asked Stine if his son reads his books.

“He never tried one because he wanted to drive me crazy and wouldn’t read them,” said Stine. He said his son instead read Garfield cartoons.

Kindergartener Chloe Wolfe asked Stine why he doesn’t include pictures in his books.

“I want you to make all of the pictures in your mind,” Stine answered. “It’s a lot scarier.”

Another student asked Stine why he writes scary books.

He told the group he is writing six new books for an upcoming “Goosebumps” series. The latest is about a zombie cat named “Claws.”

“These two kids have to take care of a cat and the cat runs out and get hits by a truck,” he said. “Guess what. The cat comes back to life. It’s very creepy.”

Students clapped and cheered. One asked Stine how he came up with the title for “Goosebumps.” Stine said he was reading through advertisements one day and saw where “goose bumps” week was going to be on Channel 11.

“ I just stared at the name because I knew it was a perfect title,” he said.

Stine told the students he reads mysteries and humor books. His favorite character he writes about is Slappy, the evil dummy.

“Slappy is fun to write,” he said. “He is really a rude character. Slappy makes me laugh.”

A teacher asked Stine if he had a teacher who motivated him to write.

“The teachers tried to get me to stop,” said Stine. “I was a weird kid. I would stay in my room all day typing stories.”

He said he found an old typewriter when he was nine years old and once he started writing stories he never really stopped.

“I wanted to be a writer,” said Stine. He said at first he wanted to write comic books, but soon realized he couldn’t draw very well.

“I was terrible at it,” he said. “My drawings were so bad that is when I knew I couldn’t be a cartoonist. I had to be a writer.”

Stine told the students he has written about 330 books.

Stine grew up in Columbus,

Ohio and was graduated from Ohio State University in 1965 with a degree in English. He began writing for magazines with Scholastic and then began writing books. His first book was titled “How To Be Funny”.

In 1997 Stine made $41 million and his books have sold more than 400 million copies worldwide. He has been named America’s number one best-selling author three times by USA Today.

“ The kids love R. L. Stine and it is a battle every day over who gets to read what book of his,” said Susie Duncan.

The conference was set up after Duncan, the librarian, e-mailed Stine to see if he would be interested in video conferencing with the students. She was surprised that he replied back the same day. Duncan said the interview was a way for the school to celebrate literacy week.

“Anything to get them excited about reading we will do,” said Duncan.

Jon-Michael Collins, 16, a student at Jenkins High School also watched the interview, because Stine played a role in his development in reading.

Jon- Michael had open-heart surgery when he was nine years old and was encouraged to walk on a treadmill for 30 minutes at a time twice a day. His mother, Cassanderia Collins, said he didn’t like to walk so she started reading Stine’s books to him while he walked.

“ I would read the ‘Goosebumps’ books to pass the time,” said Cassanderia Collins.

She said her son got to the point where he couldn’t wait to read more to see how the story was going to end. He was severely dyslexic and read at a kindergarten level when he was in the fourth grade.

“ Between Hindman Settlement School and R.L. Stine, he learned to read,” said Cassanderia Collins. “That author was so instrumental in his learning to read.”

Jon- Michael is now an avid reader who reads about three books a week.

“It was important to me because that was the author that helped me through my dyslexia,” said Jon-Michael Collins.

Whether the students participating in the video conference were fiveyears old or 16, each learned something new.

“ You all have good questions,” said Stine. “Thank you so much. I enjoyed talking with you. This is so much fun talking to you like this.”