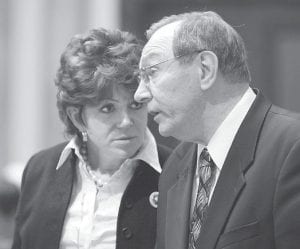 A bill that would require middle school girls to be vaccinated against a sexually transmitted disease that causes cervical cancer is advancing through the General Assembly.

The House approved the measure on Feb. 20 by a 56-37 vote. It now goes to the Senate where a similar measure died last year.

Democratic state Rep. David Watkins of Henderson urged lawmakers to approve the bill that would allow parents who object to exclude their children from receiving the vaccine.

The vaccination protects against strains of the sexually transmitted human papillomavirus that are responsible for most cases of cervical cancer.

The legislation is House Bill 396.

In neighboring Virginia, meanwhile, the Senate Education and Health Committee voted 10 to 5 to kill a bill delaying the mandate from this fall until the fall of 2010.

Opponents of the mandate have argued that the inoculation could promote promiscuity because the virus is spread through sexual contact.