My crystal ball is usually in the shop, but I hope you’ll forgive me for a momentary lapse into predictive punditry. With 2007 now history, here are some thoughts about what’s likely to occur in the media world on 2008.

One of the big media surprises of the last 12 months – the purchase of The Wall Street Journal by Rupert Murdoch’s News Corp – is apt to bring a surprising lack of substantive change to the flagship newspaper of American capitalism. Ideology is all well and good, but the Journal is too valuable a business property for the new management to diminish the paper’s credibility with any sudden shift in reporting.

Stylistic changes aside, the Journal’s news coverage will probably remain similar for years to come. And as for the newspaper’s editorials – it’s hard to imagine that they could become any more rabidly right wing than they’ve been for a long time.

Between now and November, of course, the political news will be largely transfixed with the presidential race. Overall, we’ll be treated to the customary asymmetrical patterns of coverage. 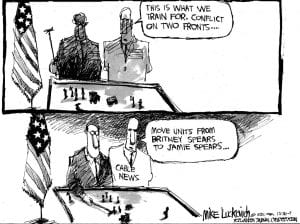 The man who emerges as the GOP frontrunner will be subjected to gobs of appreciative ink and airtime for astutely consolidating support from his party’s conservative base. Meanwhile, whoever becomes the Democratic nominee will be subjected to endless floods of cascading media advice about the need to be more “centrist” – avoiding rhetoric that smacks of anti-corporate populism and proving to be sufficiently “tough” in foreign affairs.

Religious tensions and political clashes attributed to various “culture wars” will be stoked by many news outlets throughout the year. Under the guise of merely telling about what’s going on across America, the coverage will stampede countless observers and analysts to create mistrust and enmity while claiming only to be reporting on it.

From the snows of New Hampshire to the spring days of the later primaries to the summer convention nights to the final speeches on the campaign trail in the fall, journalists will imitate each other lauding the candidates who speak of hope and finding fault when candidates neglect to punch their hope tickets. Network news anchors and famous correspondents earning seven figures per year will encourage candidates to exude optimism about the future while seeking the votes of people struggling to pay their household bills.

Serious voter-registration and Election Day dysfunctions will be predictable and predicted – and will happen anyway. The main victims will be people on the lowest rungs of the nation’s economic ladder, especially in heavily African-American and Latino neighborhoods.

Less than 13 months from now, someone will take the oath of office in the shadow of the Capitol and become the 44th president of the United States. That’s a safe bet. But it’s almost as safe a bet that when the day comes, the United States of America will be treated to a chorus of obsequious media voices hailing to the chief.

In the news media, more true reverence for democracy would bring with it much less reverence for the president – who should function as a public servant, not a sovereign. Unfortunately, the new occupant of the Oval Office can expect to move in with an inordinate reservoir of deference from a press corps that should do much less stroking and much more barking.

And that’s my saddest prediction of all: At the end of the election cycle, the big media watchdogs will be close to domesticated when they scamper anew into the White House.