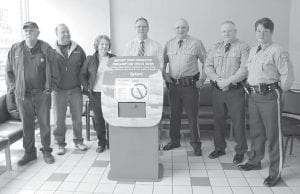 Now, citizens can place the substances in a medication dropbox, which is located at the sheriff ’s department.

“This is going to make it a lot more convenient for citizens and law enforcement,” said Webb.

Webb said when a family member dies, citizens want to get rid of the family member’s old medicines. Some people have expired medications in their residences.

Placing old meds in the dropbox is safer than flushing pills down the commode, Webb said.

“If they put it in the water stream, it is a problem,” said Webb.

Operation UNITE (Unlawful Narcotics, Investigation, Treatment and Education) officials will pick up pills monthly and will dispose of them in a mobile incinerator called the pill dragon.

The United Substance Abuse Prevention (USAP) council of Letcher County and Operation UNITE funded two drop-off boxes in the county. The other is located at Jenkins City Hall.