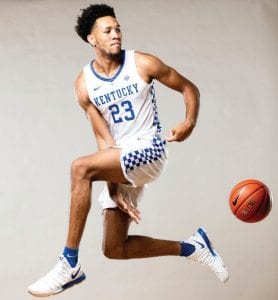 EJ Montgomery is banking on a healthy season as he contributes to the Wildcats. (UK Athletics photo)

EJ Montgomery has been around basketball all of his life.

“We always competed with each other,” Montgomery said. “Even with my parents, we would have shootouts. We have a court and me and my sisters used two play all of the time. It helped me a lot because I was always around basketball.”

Montgomery’s career at Kentucky got off to a slow start because of a lower back injury. His playing time was limited as a precaution.

“It was difficult,” he said. “I played a little bit in the first game, but I really couldn’t play my best. I was sitting on the bench the rest of the games and I was wanting to play, because we were playing pretty good.”

Although a disappointment, Montgomery said spending time on the bench offered a new perspective.

“I have a idea of how coach would have us to play,” Montgomery said. “I saw where I can fit into a game and stuff like that. I’m comfortable with my team and we all feel like family now. We feel like we can go out and compete with anybody.”

Montgomery was one of the top players in the nation and played with former LSU and No. 1 draft pick Ben Simmons early in his prep career at Monteverde High School. Montgomery averaged 25.6 points and 13.6 points per game last season and was named Cobb County (Georgia) Player of the Year.

Montgomery said his biggest attribute is his ability to score and rebound in the post.

He added that he hasn’t backed down from the competition in the post.

“It’s not really intimidating, but it’s really fun for me, because every day we compete and go at each other,” he said.

Montgomery said adjusting to college has been “tougher than I expected” but he “embraces the opportunity.”

“We work hard every day,” he said. “Everybody is really good and that’s what it is here. You can’t really focus on it (the noise) and stay level-headed. I just have to listen to my coach and try to stay focused on the court.”

He said the key is “going hard every day.”

“You’ve got to stay in the gym and just work every day,” he said. “With a team like this, you’ve got to prove something every day.”