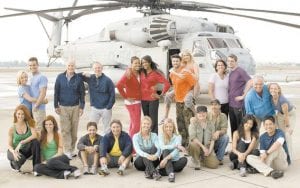 Most contestants on “The Amazing Race” must tackle language barriers during their trek around the world. As the reality series’ first-ever deaf contestant, Luke Adams had double the trouble. The 22-year-old recent college grad and his mother Margie are among the 11 two-person teams racing for the $1 million prize in the coming 14th season.

“I thought it would be easy because my mother and I have always communicated really well,” the longtime “Amazing Race” fan, who doesn’t speak or read lips, said through an interpreter. “In the airports, my mom had to do all of the work because she had to do all of the talking. It was kind of hard for me to depend on her to do all of that.”

“In the beginning, I think Luke didn’t have a whole lot of trust that I was going to communicate all of the information that I was receiving to him properly,” said Margie. “I would ask a question or for directions, and it would take five minutes to get the answer, then I’d give him a 30-second reply. He’d say, ‘No, you didn’t tell me everything.'”

Also racing are Brad Hunt, 52, and Victoria Hunt, 47, a Columbus, Ohio, couple married nine years with children from previous marriages. The show’s Web site said Victoria Hunt recently had major foot surgery and is looking to prove wrong those who told her she would never be able to run again.

“Having seven years of higher education under our belts, we thought it would give us a big advantage because we’re good at learning,” said Tammy. “We went into this race knowing that everything we would face would be difficult and new and things that we’re not familiar with, but we were really comfortable in the fact that we’re good learners.”

Beginning at the Los Alamitos Joint Forces Training Base near Long Beach, Calif., the Emmywinning CBS reality competition (premiering Feb. 15 at 8 p.m. EST) will follow the teams for 12 episodes as they travel over 40,000 miles in 22 days to nine countries, including — for the first time — Romania as well as Switzerland, India and Russia.

At 68, Mel White is the season’s oldest contestant. The gay-rights activist and former speechwriter for Pat Robertson and Billy Graham is teamed up with his 38- year-old son Mike White, the actor screenwriter who penned such films as “School of Rock” and “Nacho Libre.” Despite the frantic pace of the race, Mike insists he didn’t bicker much with his dad.

“Compared to some of the other teams, I think we got along like a Hallmark card,” he said.