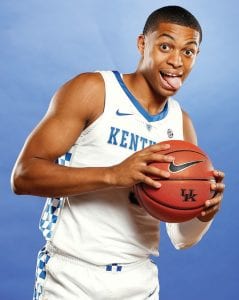 Keldon Johnson gave Big Blue Nation a glimpse into what the future holds during the team’s four-game exhibition tour in the Bahamas last August.

“I wanted Big Blue Nation to get to know me a little bit, just to see what I bring to the table and hopefully they enjoyed it,” he said. “We had a lot of freedom and we got to play our game. We got to show people what we all could do in our own way. It gave Big Blue Nation a sneak peek of what we really can do and I think it made us closer to Big Blue Nation, too.

“A lot of people came out to support us and showed us a lot of support in the Bahamas. I mean we all understand as a team they didn’t have to do that. They take out of their own time to come watch us and support us.”

Johnson admitted he was nervous at first, but the jitters soon disappeared.

“We were pretty nervous during the first day in the first half, but everybody settled down and we were really ready to show (the fans) what we could do,” he said.

Johnson, the Virginia Gatorade Player of the Year last season, learned to play the game from his brother Kaleb, who plays at Georgetown University. Johnson said his brother helped pave the way for his success on the court.

“He had a lot of influence on my game,” Johnson said. “He has definitely helped my game a lot and I learned from him. He’s defi- nitely somebody I look up to each and every day. He pushed me to work hard and it’s paying off.”

Johnson said his biggest adjustment has been getting used to sharing the ball.

“Teamwork is really the key in college,” he said. “I know I’m personally going to do it too. I think it really showed and we really shared the ball and we really played team defense. We really focused on each other more than ourselves.”

As for his own game, Johnson said he’s getting better, especially physically.

“I think I’ve got my body right for the college game and I’m definitely shooting the ball a lot better and picking my spots a lot better,” he said. “I’ve focus on that a lot more.”

In his spare time, Johnson enjoys fishing and likes the lure of making a big catch.

“I love fishing,” he said. “I love catfishing. It’s the adrenaline, when you the fish on the line, it’s just exciting. When you’re sitting out there on the boat, time flies so fast. You go out there in the morning and the next thing you know, it’s 5 p.m. in the afternoon and you’re still having fun, enjoying yourself out there. It’s a peaceful feeling and it’s just so relaxing.”