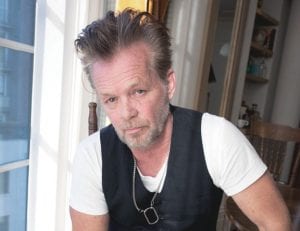 “Thank God. The cigarettes finally paid off,” Mellencamp says. “… They’re going to make my voice sound like it should sound.” (AP photo

John Mellencamp feels he has some impressive cowriters for his latest songs, like playwright Tennessee Williams and folk legend Pete Seeger.

That they’re both dead doesn’t really matter. Mellencamp believes in channeling, that other voices speak through him when he’s writing music. And, yes, he fully recognizes that sounds weird to outsiders.

His 22nd album, released just recently, is accurately described by the title “Plain Spoken.” It contains 10 literate, acoustic-based songs on religion, redemption, mature love and self-reflection, with humor thrown in. Call it age-appropriate music from a 62-year-old former rock star who now scoffs that rock is dead.

Nashville-based rock and roll band Those Darlins will perform at Summit City in Whitesburg on Thursday, October 16. Tickets, $8, are on sale now at www.summitcitylounge.com

A Rolling Stone online article about Mellencamp one time was headlined: “He had one of the greatest careers in pop and rock and hated every minute of it.”

Not quite true, Mellencamp said. He didn’t like stardom, chafed at record company pressure and saw hits as the quickest way to make his mark. He had plenty: “Jack and Diane,” ‘’Hurt So Good,” ‘’Paper in Fire,” ‘’R.O.C.K. in the U.S.A.,” ‘’Pink Houses” — the list goes on.

His present feelings about songwriting and rock ‘n’ roll leave him with an uneasy relationship with many of those old songs, which are kind of like old high school chums you don’t hang around with anymore. “Pink Houses,” for instance, “was an inspiration song, but John got involved in the last verse and screwed it up,” he said, drawing out the vowel in his own name.

The goal for “Plain Spoken,” executive produced by T Bone Burnett, was to let the songs and melodies speak for themselves.

“I will rearrange all of the old songs and they will sound like they came off this record,” said Mellencamp, who will tour for much of next year. “You’ll recognize the songs, of course, but it won’t be the arrangement that you’re familiar with. It will become a whole new song.”

“It’s not filled with the pop hooks that the ‘Jack and Diane’ era are famous for,” Hilly said. “But it’s a very thoughtful record.”

Mellencamp’s recent comments about his need to make age-appropriate music are certain to rub some peers the wrong way. He doesn’t see the point of running around a stage and singing about girls the way he did 30 years ago. He remembers seeing James Brown in his prime and being electrified, then cringing 25 years later watching the soul master struggle to get up from his signature splits.

An example of how he talks to his peers is the song “The Isolation of Mister,” about a headstrong man who got it all wrong when he was younger. Autobiography? To an extent, but Mellencamp said many can relate.

“I think that a lot of men when they reach a certain age, they realize what they’ve done and what their regrets are,” he said.

The Indiana resident’s quieter music shouldn’t be a surprise to anyone who’s followed the last half of his career. What may take listeners aback is his voice, more weathered now and limited in its range.