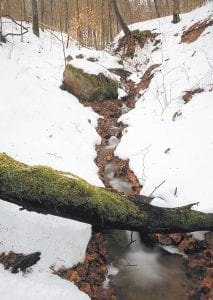 The deep snow which began falling over Letcher County on February 16 was topped off with another couple of inches early February 24, but the melting had resumed — somewhat — by late Tuesday afternoon. Still, the forecasters at AccuWeather were calling for an additional inch or two of accumulation on Thursday. (Photo by Thomas Biggs)