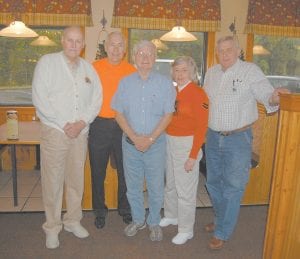 The 1951 Whitesburg High School boys basketball team reunited Sept. 23 at Pine Mountain Grill. The basketball team, which was the second boys’ basketball team from Whitesburg to play in the state tournament, made it to the Final Four at Memorial Coliseum in Lexington. The group was coached by Ray Pigman, who had played on the 1936 team, which was the first Whitesburg team to make it to the state tournament. Pictured from left are Steven Carroll Sexton of Thornton, Eddie B. Collins of Mansfield, Tex., Ronnie Kincer of Lexington, Shirley Fields Hall of Lexington and Roe Adkins of Viper. Mrs. Hall is the only surviving cheerleader of the 1951 WHS cheerleading squad.