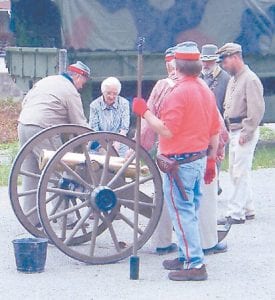 MEMORIAL DAY — Lizzie Mae Wright (center) was one of three people selected to fire the antique cannon at the Letcher County Veterans Museum in Whitesburg on Memorial Day. The other two were a soldier who was home on leave and a member of the Seventh Sons Motorcycle Club.

A large crowd gathered May 24 at the Letcher County Veterans Museum in Whitesburg to honor veterans in a Memorial Day ceremony.

The crowd was welcomed by Darrell Holbrook, the museum’s secretary, after the Colonel Ben Caudill Camp of the Sons of Confederate Veterans got everyone’s attention by firing their cannon. After the opening speech, David Chaltas, in the persona of Robert E. Lee, read a poem about the sacrifice of veterans of all time periods. Jimmy Duncan, a former prisoner of-war in Korea, talked about the men and women who are in harm’s way today, and Whitesburg Mayor James Wiley Craft thank the crowd for supporting the troops, present and past.

The Veterans of Foreign Wars honor guard fired a 21-gun salute, followed by the playing of “Taps”. A chaplain prayed, praising the troops and asking God to protect them.

After the program, the Caudill Camp once again fired the old mountain howitzer cannon, filling the air with back and gray smoke. Holbrook chose three people from the crowd to pull the lanyard on the cannon, firing the antique piece. The three were Lizzie Mae Wright of Mayking, who is the first known woman to fire the antique artillery piece; a soldier who was home on leave, and a member of the Seventh Sons Motorcycle Club, which was in full attendance at the event.

The museum is open to the public Tuesday through Saturday each week and there is no admission charge. For more information about the Colonel Ben Caudill Camp, visit www.bencaudill.com.