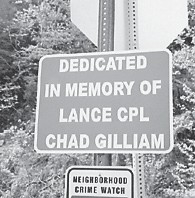 ROAD DEDICATED — On May 12, the road at Cook Branch, Mayking, was dedicated to the memory of Lance Corporal Chad Gilliam, who died Jan. 3, 2009, at Camp Buehring, Kuwait. He was the son of Mary Ellen Cook Gilliam and Paul Gilliam. Letcher County Judge/ Executive Jim Ward read the resolution of Letcher Fiscal Court to dedicate the road in Gilliam’s memory. Gilliam’s family expressed their gratitude to Darrell Holbrook for his work on the project, along with Buddy Grubbs. Holbrook and Grubbs are both members of the Letcher County Veterans Museum. The family also thanked the fiscal court and Ward.

Sunday, May 23, was the memorial service at the Hop Gibson Cemetery. We were blessed with perfect weather, great preaching by Woodrow Fields and Johnny Banks, and beautiful singing, which somehow sounds better outside.

The cemetery was well tended and decorated. This meeting is an annual event since the late 1920s. There were five folks in their 90s and some in their 80s attending, who remember it with dinner on the ground from their early childhood.

The cemetery was started in 1883 with the burial of Jane Adams, 18-year-old daughter of Stephen and Martha Adams. She had requested that she be buried on the grassy knoll where she had played as a child. There are now 94 different graves representing several diff erent families, and a few graves marked only with stones without names.

Sunday, May 30 was the memorial service at the Dinah Blair Cemetery on the mountain. They reported a good service there, also, with Johnny Banks and Bert Banks preaching. There was a good crowd and the cemetery looked real pretty. 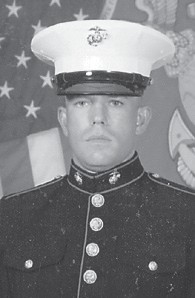 Some of the visitors in the community were Jeff and Debbie Vice, who attended the meeting at Hop Gibson; Bruce and Diane Preston, who visited his mother Ella Preston and family graves in eastern Kentucky and West Virginia; Clifford Johnson and family, who visited Elsie Banks and family graves; Lou Atha Chesse and J. K. Banks, who visited the graves of their parents, James and Verna Banks, and visited friends and relatives; and Irenen Banks and Doug Banks, who attended the memorial service at the Hampton Cemetery Saturday and church at Little Cowan on Sunday.

Thursday, many people enjoyed a plant swap at the Extension Office. This is a beautiful place on the hill overlooking Whitesburg.

Charles and Faye Banks celebrated their 21st wedding anniversary May 20. Time is swiftly passing by.

Robby and Richard Brown attended the funeral of their cousin Kendall Cook in Ohio last week. Kendall was the son of the late Elmer and Maxie Cook, and a grandson of the late Louis Cook Jr. and Susan Cook.

Robby has also been visiting family. He, Richard and Kevin Brown, Tommy Robinson and Justin Fields all went to Tennessee and caught a lot of fish.

Saturday night, the Little Cowan Church hosted the fellowship meeting of the Eastern District Primitive Baptists. This takes place whenever there is a fifth Saturday in the month. Because of the holiday there weren’t as many visitors as usual, but we still had a wonderful meeting. The visitors included Burnice Sybert and Greg Hill. These are sons of J. H. Sybert and grandsons of Ben Hill, both well-known preachers of our past.