Memories and moments at WHS 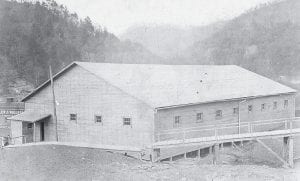 The new Whitesburg High School gym was erected in the fall of 1927. It was a frame building 98 feet long by 60 feet wide, had a playing space 78 feet by 40 feet. The height was 21 feet. The building was heated by a hot air furnace, donated by Mr. Ed. Williams, a local hardware merchant. The gym was well lighted and had one of the best floors of any high school gym in the state. (This description was taken from the Letcher County Historical Society publication of 2005.)

Whitesburg soon gained experience in their own gym and became a team to be reckoned with as they traveled to the state tournament in the 1930’s under Coach Millard Tolliver. It is believed that the gym burned sometime around 1939-40.

Whitesburg High School opened the 1928 basketball season by defeating the fast Blue Diamond team 19 to 13 in a hard-fought game Saturday night on the new gymnasium floor. 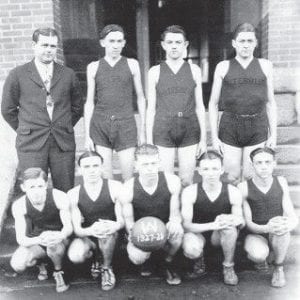 Between 300 and 400 people saw the opening game. The doors of the gymnasium were thrown open to the public, in appreciation for the aid in erecting the new playhouse, and lovers of the sport were urged to be the guests of the school.

The enthusiasm of the players and the spectators was high. Whitesburg boys were handicapped by lack of training. The gym was not completed until the first of the season and the team had practiced in scrimmage only once, but the boys went into the game in great spirits and showed promise of real development later. The rough edges will have to be rubbed off by hard practice, but by the end of the season Coach Glenn should have a team that will be a credit to the school, and one that should take honors in a tournament. He has the material and the boys are anxious to work with him.

The new gym is a real credit to the school and to the citizens who made its completion possible. Many expressions of praise have been heard from officials of the school, pupils, and patrons.

(The above article appeared in The Mountain Eagle January 12, 1928.)

Strange BUT TRUESPEAKING OF SOAPSFighting back against rising grocery prices