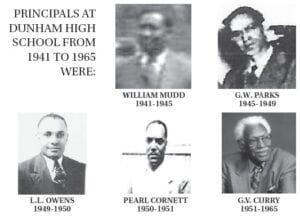 Dunham High School was a school established for Black students under the Jenkins Independent School System in 1931. Before the high school was established in 1931 there were only elementary schools in Letcher County for Black students. There were schools in Burdine, Jenkins, and Dunham and later McRoberts was included in the school system on April 26, 1915. Because of a Kentucky mandate which stated that schools should be separate but equal, Dunham High School was established. Dunham High had four principals from 1931 until the school was forced to desegregate in 1964.