Memories of growing up in Marlowe 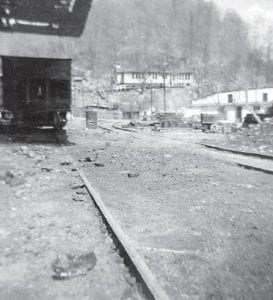 Marlowe School is pictured in the background, and the slate dump in the foreground.

One of the people in my life that I admired greatly passed away last week, Virginia Brown. She and her sister, Beulah Caudill, made a huge impact on me, my brother and my sisters, when we were in their Sunday School classes at Little Cowan Primitive Baptist Church.

They weren’t just teachers of the Word, they were doers of the Word, also. The one lesson I remember more than any other was about the verse saying we should forgive and forget. Hebrews 8:12 says “For I will be merciful to their unrighteousness, and their sins and their iniquities will I remember no more.” They taught us that just as Christ forgives and forgets so should we as Christians. Virginia and her husband Myrel Brown had our family over after church for Sunday dinner many times. We loved going to that place. The house and the grounds were amazing to us.

One of the things I remember most about Myrel was the way he was always commenting on how pretty we looked. Once he told my sister Delores her dress was very pretty and asked her where she got it. She was only about 4 and so her answer was, “I found it in my drawer.” Virginia and her sisters were amazing quilters, too. I think Appalshop did a documentary on their quilting skills once. I know her family will miss her very much and the whole community will also. I thank God for placing them in our lives. 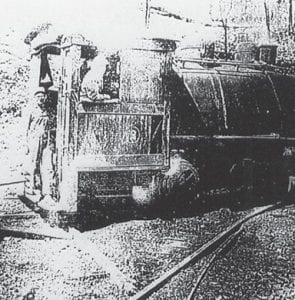 The dinky at Marlowe Coal Company was enjoyed by the children at the coal camp.

Mom, Charlene and I attended her funeral service, Monday the 22nd at Little Cowan Primitive Baptist Church and it was so good to see so many of the people that we went to church with many years ago. Bernard Banks’s children think the world of Mommy. He is the preacher that married them in 1953. They are a very special family to Mommy, too.

Ramona and Bob Caudill’s daughter Laura and I reminisced about all the things we did outside around the church when Mom and Dad thought we were actually in the church service. We would sneak out one by one, supposedly to use the toilet, and just not come back until church was almost over. One of those times we were out playing a game where we would drop leaves in the creek off one side of the bridge and see which one made it out on the other side first. Well, my sister Lucille got her foot hung under one of the boards on the side and fell off the bridge down into the creek. She was soaking wet and believe it or not the rest of us didn’t care that she was wet but that Mom and Dad would know something had been going on while we were supposed to be in church. So, we made her go to the car and took her clothes and waved them around like crazy trying to get them dry enough that they wouldn’t notice. It must have worked because I don’t remember them suspecting anything at all.

Another time I remember our brother Albert getting into a fight with Laura’s brother Robert Caudill (while we were out there playing instead of in church) and Albert took off running to the car and locked all the doors and rolled the window down about an inch and put his mouth right up to the crack and hollered at Robert, “Chicken!” You would think we didn’t get to hear any preaching, but believe it or not all five of us children are now Christians.

Hopefully we are in for a stretch of warmer weather. Mom and I are more than ready to get back into our schedules at the rec center and seeing all the people at Senior Citizens. It will be a pleasure to hear Mom and Lizzie Mae Wright carry on a conversation about old times.

We have been having a conversation on Facebook about the dinky and slate dump that was owned by the Marlowe Coal Company and was in the camp. Many Marlowe residents must have spent hours playing there. Maybe that’s why “Speed Nichols,” not Scrub Nichols like I said last week, made the comment to Mommy and her brothers and sisters about getting in the new washer and taking a bath themselves.

Here’s the conversation from Facebook and the picture the comments were made about is pictured here:

Jeanette Tacket Yonts: Ernest Kathleen Brock I know that’s the school but is that the commissary on the right hand side of the picture?

Kathleen Brock: Yes that is the commissary and Maynard Banks and Nellie lived in the little white house at the foot of the steps going up to the school. Put all you can of the oldies on here. Love all of you.

Ruth Ann Blair Brown: I lived in Marlowe in the 50’s. We lived on the row where Tommy Hatton and Frank Wilson lived.

Margaret Combs: Love this picture. So many memories, we played softball there at the old tipple.

Jim Cornett: At one time, we lived in that house at the foot of the school hill in this photo.

Joanne Cole: Someone please tell me I think I remember something called a dinky or was it a small train, no one knows what I’m talking about.

Astor Hatton: It was the old train that brought the coal from the head of the hollow when they worked the mine before moving the operation of the mining to Camp Branch!! It was parked in a shed above the tipple for years when we were growing up.

Joann Cole: Was it called a dinky? I remember it running out of the holler I think.

Ellen King: I miss my home at Marlowe I wish I could go back there and live.

Jo Ella Taylor Sturgill: It was our playhouse for many years.

Donald Dixon: The train was called the dinky.

Margaret Combs: Joann, we loved that old dinky. Back in the day, if it ran off the track it would have taken out our houses. Used to put pennies on the track when it came down.

Joann Cole: No one knows what I’m talking about when I talk about a dinky. When we lived in the holler it ran on the tracks on the hill there was a slate dump that we used to play on it was across from Margie and Eli’s house, just a flat place beside the track the men that ran it always waved at us.

Donald Dixon: I played on it.

Jo Ella Taylor Sturgill: We played on it all the time. It was our playhouse. The things that we made our toys way back in Marlowe would make kids today laugh at us. If they only knew the fun we had.

Shirley Boatright Lattis: I know what that is also.

Sue Reed Morris: What fun we had on that old slate dump.

Euna Bates Caudill: Yeah I loved it too. I remember the tipple and the store the bathroom house.

Mildred Spence: Thanks for posting these pictures.

You know what? Me and my brother and sisters and all the neighborhood kids also played around an underground coal mines and a tipple. It was in Cane Hollow and as teenagers we would go up the “holler” after the coal miners went home for the day.

There were all five of us kids with some of our neighbors and best friends, Phyllis, Velma, Teresa, and Becky Proffit. Their older sister, Joyce Baker, is our good neighbor now, but I don’t think she ever played with us at the mines.

We would climb up on a crane-like thing that had coal on it and jump off into a coal pile. My friend, Velma, was the one who could climb up farther than the rest of us. I thought she was so brave.

We would get their big fat pieces of chalk used to keep their tonnage down on a post (or at least that’s what we always thought they did with it because we saw marks like that on the post) and make us a hopscotch on the road.

We would play all kinds of balancing games on the railroad tracks, and then the thing I thought was the most fun was playing what we called, “Who’s the Bravest?” We would see who would go back in the mines the farthest.

I think the Begley children joined us in a lot of these games too. There were Wayne, Jeff, Kaye, and Shacky. I cannot believe any of us didn’t get seriously hurt doing all that crazy stuff. If Dad and Mom had known what we were up to they probably would have tanned our hides and banned us from going around the mines anymore.

My husband’s mom, Evelyn Yonts, is in very serious condition at the Hazard Health and Rehabilitation Center. She is very weak and has pneumonia again. She is 89 years old and so this is very hard on her. We really need everyone’s prayers.

My aunt Linda Hall is also still in Letcher Manor Nursing Home and needs everyone to pray for her. Two of my friends, Diane Holbrook Cook and her husband Jerry Cook, also need our prayers in the loss of their son, Jeremy Cook.

Then, there are all the others who have lost loved ones that need our prayers.

On that note, remember what Oma would always say, try your best to be in church somewhere Sunday. And if your church has services Sunday evening or throughout the week God would want you there then, too.