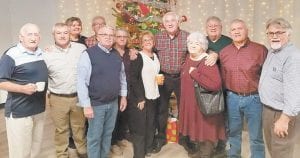 While at the rec center one day last week I had the pleasure of meeting Will Connelly. He introduced himself to me and said he had talked with one of my good friends, Ida Webb Adkins, and she had told him I also had a relative killed in the Pearl Harbor bombing on Dec. 7, 1941.

It seems Will had a third cousin, Lauren F. Bruner, that was one of the servicemen on the USS Arizona when it was hit with a bomb dropped by a Japanese plane. There was so much oil leaking from the ship, so the men couldn’t jump because the water was on fire. Bruner and several fellow shipmates shouted to a sailor on the ship next to the Arizona to toss over some rope. The six of them used the rope to carry themselves hand-over-hand to the USS Vestal, 100 feet away.

Then 21-year-old Lauren was the second to the last person to escape the burning wreckage and he later wrote a book about it titled, “Second to the Last to Leave USS Arizona”. Lauren Bruner passed away this past September at 98 years old. Seventy eight years later, Dec. 7, 2019, Lauren Bruner’s remains were placed in the USS Arizona. 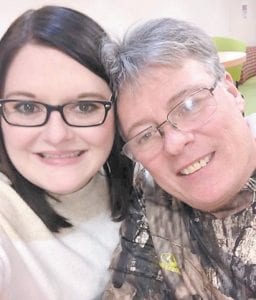 Shelby Wynn is pictured with his wife Amanda Begley Wynn.

My uncle, Walker Tackett, was my dad’s oldest brother. He was in the Navy during World War II. There are conflicting stories about his actual involvement during all the events that took place. Mom had always told us Walker was home on leave Dec. 7, and was called off leave because of the bombing. Other stories were he was on a ship and died during the bombing. He was listed as Missing In Action, however, and his remains were never found.

Of the 1,177 USS Arizona sailors and Marines killed at Pearl Harbor, more than 900 could not be recovered and remain entombed on the ship. Can you imagine families having to watch their loved ones go off to war at this time of the year? We should be so thankful for our servicemen and women past and present. Without them we would not have our religious or other freedoms.

Our first-ever fundraiser for the Letcher County Senior Citizens was a success. So much so, that we intend to have another one before Christmas. Thank you so much to all who came by and purchased something. We truly appreciate it.

I had a phone call last week that had me highly perturbed. I’ve got to where when the phone rings if it’s an unknown number or toll-free, I really do answer them. I figured if they aren’t going to quit calling until they get an answer, I might as well answer and tell them I’m not interested in whatever they are trying to sell or scam. So, a man that was having a really hard time pronouncing his words so that I could understand him proceeded to tell me he was from Publisher’s Clearing House. He asked if I was familiar with that. I hesitated while thinking of how they say not to say yes as they are recording you to use it for their own good. So, I just hung up. Believe it or not, he called right back and asked in an angry voice, “Why did you hang up on me?” I couldn’t believe he had the nerve to ask me that, so I said, “Excuse me?” He asked me again, “Why did you hang up on me?” I said, “Weeellll, first of all Publisher’s Clearing House does not call your house!” He snarled, “You did not even let me tell you in what it was reference to.” I then snarled back, “And second of all, I can hang up on whomever I want to hang up on, thank you very much sir!” I slammed the phone down and he didn’t call back.

About a month ago at Mom’s, someone called to say her Social Security number was in risk of being revoked because of her suspicious activity in Texas. I stayed on the line to talk to them and told them they should be ashamed of themselves for what they are doing to elderly people who are so trusting. They proceeded to cuss at me. Again today I tried to talk to them and tell them to take Mom’s number off their call list and they asked why. I just laughed and said you all are crazy if you think we are going to fall for this. He then cussed at me. If you all have elderly loved ones that are answering their own phones, make sure they know not to tell these people anything about their Social Security, Medicare or bank accounts.

I’m sure many of you know about three-year-old Laney Webb and her fight with leukemia. There’s another fundraiser coming up for her and her family. This post was copied from Facebook:

Join us for a fun night! We’ll be painting a special Christmas scene and raising money for Laney Webb. The cost will be $35 and will include your donation to Laney, all painting supplies and instruction, as well as a special Christmas snack. We’ll also have a tote collecting items to send to Laney and Michelle to help make their hospital stay more comfortable. Seats will be limited, so sign up ASAP.

To sign up you can call the Letcher County Recreational Center at (606-633-7027) or get in touch with Bridget Back or Maranda Webb.

Grab your family and friends, get in the car and get ready for a night to remember by taking part in Double Kwik and Letcher County Tourism’s 2019 Christmas Light Scavenger Hunt. The hunt will take place from 5-9 p.m. on Thursday night, Dec. 19, with a live and local remote on 103.9 The Bulldog from 5-7 p.m. Start off the night by visiting one of the 4 participating Double Kwiks, listed below, to grab a scavenger hunt list and a free hot cocoa or coffee for the road. While out and about looking for lights, show off your Christmas spirit by sharing your pictures to Tourism’s Facebook event page with #Christmaslightscavengerhunt.

As I drive around our community and look at the Christmas lights, I’m reminded of how little extra money we had when I was young to spend on frivolous things like Christmas decorations. When I see all the yards with many decorations I think about our single strand of lights around our window and how blessed we were to have that.

One of the homes I will miss this year is the one of Yvonne Tackett on Colson. She always had her home so festive looking. Please pray for her siblings this year as they celebrate without her for the first year. Also Pat Wright and all the others that have lost loved ones this year.

Remember our neighbors Imogene Sexton and her family. One of her daughters, Sandra Wilson is also having to deal with her husband Terry Wilson having cancer. They desire everyone’s prayers.

Please continue to pray for our pastor Bill Jones and his wife Sandy and their children and grandchildren, especially during the Christmas season.

One of the pictures in our column this week was taken at the Howard family’s Christmas Party. It still doesn’t seem right that we aren’t reading Oma’s column in this paper. Remember her ending, make sure you are in church Sunday and if your church has services Sunday night or throughout the week, you should be there then, also.