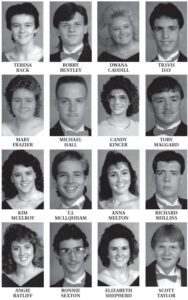 Mr. Treece attended our meeting and made a proposal for each student to take into consideration concerning the trash lying in the hallways and on school grounds. If we, the students, can keep this under control for a period of time we will be able to have a dance during sixth period sometime soon. This has been approved by the central office. So, let’s really try and we will be rewarded for our effort in cleaning up around school.

Math Club – On the second Wednesday in October the Math Club had their initiation of new members. Each person dressed up and Jimmy Hall received a prize for the best dressed. They had 11 new members initiated. The same day they elected new officers and they are: President-Angie Hatton; Vice-President-Kim Gilbert; Secretary-Jennifer Stephens; and Treasurer- Vanessa Fields.

French Club – The third week of October the French Club held their initiation. It was held the first three days of the week and on the last day a party was held in honor of the new members. They had 20 new members initiated. This same day new officers were elected and they are President-Bart Frazier; Vice-President-Angie Hatton; Secretary-Stephanie Collins; Treasurer-Renato Lopez.

DECA Club – Sandy Meade is the DECA Secretary and has been an active member of the club for three years. This year she is participating in the Phillips Petroleum Project which promotes free enterprise. Some of the activities she has been involved in are the following: Showing a filmstrip on free enterprise at Martha Jane Potter to an eighth-grade class, displaying posters in windows during the Mountain Heritage Festival, doing a 55-second spot announcement on WTCW radio, and many more activities to complete the project.

Morehead State University will be sponsoring a band clinic February 9-12 in Morehead. Students who were selected for the clinic were required to send an audition tape to the head of the M.S.U. music department. Many students unsuccessfully tried out from all over the state. However, Whitesburg had five students who were selected to participate in the clinic. Those students were John Chris Hylton, Cyndee Reynolds, Steven Lewis, Jeff Hylton and Johnny Eldridge. The students will leave Whitesburg on the 9th and return home on the 12th. During their stay the instructors will be teaching them various ways to play music and how to make better use of their instrument.

A new car and some clothes – Signed: Felicia Morton

Some clothes, weights, and lots of happiness and love through the world – Signed: William Miles

A new car and a million dollars – Signed: Linda Potter.