Men are fond of gathering spot 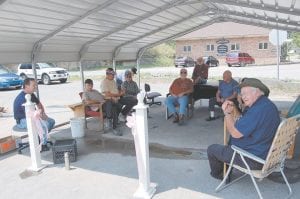 BOAR’S NEST — The old A&P parking lot has become a popular gathering spot for retired men in Letcher County. Elbert Lee, of Whitesburg, said sometimes by the end of a day about 100 people will have stopped by to sit and talk under a carport located on a corner of a parking lot in front of the old A&P building in Whitesburg. Members of the Boar’s Nest include Gary Fields, Robert Amburgey, Dewey Bradley, Hobert Sergent, Terry Richardson, Elbert Lee, Clarence Sexton and Bernie Johnson.

An unofficial men’s club that meets in Whitesburg nearly every day has a couple of rules that are strictly enforced.

“No profanity at this place, no alcohol, no whistling at women,” said Elbert Lee, a member of the club referred to as either the “Boar’s Nest” or “Liar’s Nest.”

“If you do, you will get kicked out of the club,” added club member Bernie Johnson of Smoot Creek.

Lee and Johnson are two of several men, many of them retired, who can be found nearly every day sitting under a portable carport located in the parking lot of the old A&P (later United Foods) grocery in Whitesburg.

According to Lee, as many as 300 people, mostly men, stop and visit with those who are already sitting under the carport drinking coffee and discussing nearly anything that crosses their minds.

Club member Terry Richardson, of Colson, said many of the regulars are retired coal miners. Richardson said he began hanging out with the group when he would bring his father, Arnold Richardson, to visit. He said his two uncles, Ed and John Richardson, also made frequent stops.

“Most of the time when you come to town on business, when you get your business done you end up here,” said Richardson.

“I come early in the morning and leave late in the night,” said Bernie Johnson.

Clarence Sexton said sitting around under the carport is “just something to do.”

The group’s beginning dates back to 2006 when the Letcher Fiscal Court banned smoking in all public buildings in Letcher County, including restaurants such as Dairy Queen, which is located beside the old A&P.

A group of men who were left without a place to smoke cigarettes and drink coffee began gathering outside the Dairy Queen, but soon moved their daily gathering to a covered entrance at the old A&P building. With demolition of the building set to begin any day now to make room for a county recreation center, they recently moved to the portable carport, which was placed in the parking lot by the Letcher Fiscal Court.

While smoking is the common thread that got the group started, visitors don’t have to smoke to sit under the carport. In fact, several of the regulars are nonsmokers.

Exactly what do the men do under the carport all day?

“Honey, they trade guns. They talk. Drink coffee, everything they can think of,” Richardson told a Mountain Eagle reporter this week.

They are permitted to talk about everything except their wives, or so they say.

“We don’t talk about our wives,” said Lee. “They are the bosses of our houses.”

“They don’t discriminate here,” said Richardson. “They’ll talk about everybody.”

“If you believe anything that is said to you when you walk out of here you are in trouble,” said Gary Fields, a visitor from Virginia.

Located under the carport are two wooden benches built by Sean Blair, chairs, and a desk that has sidewalk chalk in a drawer for children to draw with.

“Some guys come and bring their grandchildren,” said Lee. “It’s a welcome center for anybody in Letcher County. Everybody’s welcome.”