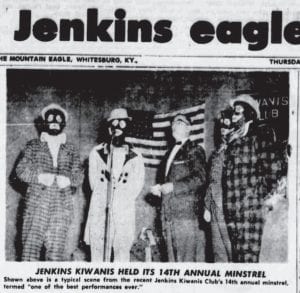 The photo at top comes from the December 4, 1958 edition of The Mountain Eagle and shows a scene from the Jenkins Kiwanis Club’s “14th Annual Minstrel.”

With all the controversy taking place in neighboring Virginia over current Gov. Ralph Northam wearing blackface in a photograph in his 1984 medical school yearbook, it is hard to believe for many people today that watching educated white men sing and perform skits with their faces painted black was once an accepted form of entertainment in nearly every community in the United States, from New York City to Jenkins, Neon and Whitesburg.

In Letcher County, grade school and high school students, encouraged by teachers and PTA members, appear to be the first to have appeared in locally-produced variety shows known as “minstrels,” in which the performers wore black shoe polish or some type of makeup while playing the role of a black performer singing, dancing or doing a comedy skit.

A search of The Mountain Eagle’s digital files — some of which date back to 1907, the year the paper was founded — indicates that on February 6, 1931, the Jenkins PTA sponsored what appears to be the first fundraising minstrel in Letcher County that was openly advertised as featuring performers in blackface. 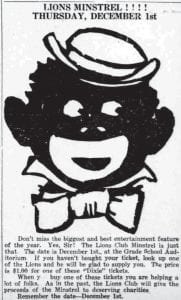 The advertisement at right touting a Lions Club minstrel appeared on the front page of the November 17, 1955 edition of The Eagle. As shocking and insensitive as it seems today, the Letcher County towns of Jenkins, Neon and Whitesburg were no different than hundreds of communities elsewhere in the United States — North, South, East or West — during the 1940s, 1950s, and very early 1960s when it was common practice for civic organizations to stage “blackface” minstrels as a means of raising funds that would go to benefit public projects and various charities those clubs represented.

“Cotton picking scenes, stunts, songs, wisecracks, and black faces galore,” said an announcement from the Jenkins Parent- Teacher Association that appeared in The Eagle two days before the show was performed by “teachers, citizens, and high school pupils” in the Jenkins High School Auditorium.

The county’s first amateur blackface minstrel sponsored by a civic club appears to have occurred on December 13, 1941, when the Kiwanis Club of Letcher County “presented an old-fashioned minstrel show for the purpose of raising funds for underprivileged children throughout Letcher County.” A press release announcing that show, also held at the Jenkins High Auditorium, promised it would be “an evening of mirth and entertainment with the usual blackface gags and skits interspersed with both serious and comic song.”

The Whitesburg Grade School sponsored what it called a “Negro Minstrel” as part of its Halloween Carnival held on October 22, 1943. “If you are easily scared, beware!” a school announcement exclaimed. “Don’t go into the Devil’s Kitchen.”

The Eagle’s files also show that, with a few exceptions, the local schools began to get out of the minstrel show business after the Jenkins Kiwanis Club and Whitesburg and Neon-Fleming Lions Clubs began annual runs of blackface minstrels, some lasting up to 20 years.

On December 1, 1949, Kentucky’s thenlieutenant governor, Lawrence Weatherby, was the principal speaker at the Jenkins Kiwanis Club’s fifth annual “Kiwanis Club Minstrel,” which drew what The Eagle called “a large and appreciative crowd” that was entertained with a “Harlem Hop” before the program ended with a “Negro prayer.”

Proceeds from the Jenkins Kiwanis Club minstrels, many of which were held in the old Jenkins Fieldhouse before crowds of at least 800 people, helped the club build a public swimming pool, build the Fieldhouse itself, support the community’s Little League baseball program, and provide assistance to disadvantaged youth.

Eagle files indicate the Whitesburg Lions Club began sponsoring and performing in blackface minstrels in 1945, sometimes in both Whitesburg and Neon.

Money raised from the Whitesburg Lions Club minstrels was used for eyesight conservation, the Whitesburg kindergarten, and Christmas presents for children at the General Baptist Orphanage.

The Whitesburg Lions Club’s 15th annual minstrel, performed in December 1960, was to be its last in which blackface was used. Three young kindergarten students appeared in that event’s only blackface skit.

“This year’s minstrel, which was well received, was a departure from the traditional blackface shows of past years,” The Eagle reported in its December 15, 1960 edition. “Director Mrs. James Frazier and club members decided to try instead a combination country-hillbilly show and came up with ‘Clem, a Country Corn Musical.’”

While no news story or commentary exists in the available Eagle files that would explain the Whitesburg club’s decision to stop the blackface minstrels after 1960, it appears that at least some of the club’s members and supporters were sympathetic to a national media campaign being run at that time by black mothers who wanted a ban on all blackface performances.

The Jenkins Kiwanians were slower to abandon the shows. The December 8, 1966 edition of The Mountain Eagle includes a lengthy recount of the 22nd Annual Kiwanis Minstrel held at the Jenkins Fieldhouse on December 2 and 3.

The “endmen” — the targets of the stereotypical jokes associated with blackface minstrels — were named Snowball, Sambo, Rastus, Hambone, Tambo, and Zeke and were played by Jenkins school teachers, businessmen, and public officials. The “interlocutor,” or straightman, was played by a Beth-Elkhorn Coal Company official.

In addition to the performances of songs made popular by blackface minstrels, such as “Dixie” and “Camptown Races,” the program also included more normal acts such as the local rock and roll bands The Merchants and The Jades, who were accompanied by a group of young dancers who called themselves The Jadettes.

Dance routines were also performed by the Jenkins High School majorettes and cheerleaders, and a young dance instructor tap-danced to the Herb Alpert & The Tijuana Brass hit “Whipped Cream.” Also on the bill was a “talent show” in which men dressed as women and competed under the names Miss Mini-Skirt, Miss Jet-Set, Miss Goodwater, and Miss December Playboy Playmate.

The Mountain Eagle’s files indicate the show was the last of its kind sponsored by the Jenkins Kiwanis Club. It also marked the last time an amateur blackface minstrel was mentioned in a news column in this newspaper.