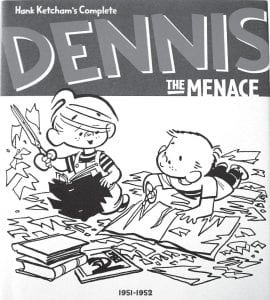 “Dennis the Menace,” one of the most popular newspaper comics in history, debuted in 16 U.S. newspapers on March 12, 1951. Created by the late Hank Ketcham, the cartoon still appears in 1,000 newspapers today. Ketcham was inspired to create the strip by the actions of his own son Dennis, who as a four-year-old in 1951 messed up his room while he was supposed to be napping, leading Mrs. Alice Ketcham to tell her husband, “Your son is a menace!” (AP photo/ Fantagrahics Books)