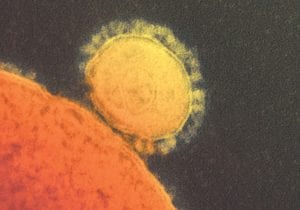 This photo provided by the National Institute for Allergy and Infectious Diseases shows a colorized transmission of the MERS coronavirus that emerged in 2012. Health officials now say the deadly virus from the Middle East has turned up for the first time in the U.S. (AP Photo/National Institute for Allergy and Infectious Diseases)

Health officials confi rmed the first case of an American infected with a mysterious virus that has sickened hundreds in the Middle East.

The man fell ill after flying to the U.S. late last month from Saudi Arabia where he was a health care worker.

He was hospitalized in good condition in northwest Indiana with Middle East respiratory syndrome, or MERS, the Centers for Disease Control and Prevention and Indiana health officials said.

The virus is not highly contagious and this case “represents a very low risk to the broader, general public,” Dr. Anne Schuchat told reporters during a CDC briefing.

The federal agency plans to track down passengers he may have been in close contact with during his travels; it was not clear how many may have been exposed to the virus.

So far, it is not known how he was infected, Schuchat said.

Saudi Arabia has been at the center of a Middle East outbreak of MERS that began two years ago. The virus has spread among health care workers, most notably at four facilities in that country last spring.

Officials didn’t provide details about the American’s job in Saudi Arabia or whether he treated MERS patients.

Overall, at least 400 people have had the respiratory illness, and more than 100 people have died. All had ties to the Middle East region or to people who traveled there.

Experts said it was just a matter of time before MERS showed up in the U.S., as it has in Europe and Asia.

“Given the interconnectedness of our world, there’s no such thing as ‘it stays over there and it can’t come here,’” said Dr. W. Ian Lipkin, a Columbia University MERS expert.

MERS belongs to the coronavirus family that includes the common cold and SARS, or severe acute respiratory syndrome, which caused some 800 deaths globally in 2003.

The MERS virus has been found in camels, but officials don’t know how it is spreading to humans. It can spread from person to person, but officials believe that happens only after close contact. Not all those exposed to the virus become ill.

But it appears to be unusually lethal — by some estimates, it has killed nearly a third of the people it sickened. That’s a far higher percentage than seasonal flu or other routine infections. But it is not as contagious as flu, measles or other diseases. There is no vaccine or cure and there’s no specific treatment except to relieve symptoms.

Federal and state health officials have released only limited information about the U.S. case: On April 24, the man flew from Riyadh — Saudi Arabia’s capital and largest city — to the United States, with a stop in London. He landed in Chicago and took a bus to nearby Indiana. He didn’t become sick until April 27, the CDC said.

He went to the emergency room at Community Hospital in Munster the next day with a fever, cough and shortness of breath. He was admitted and tested for the MERS virus because he had traveled from the Middle East. The hospital said he was in good condition.

As a precaution, the hospital said it would monitor the man’s family and health care workers who treated him for any signs of infection.