Meth charges filed against 70 here so far this year 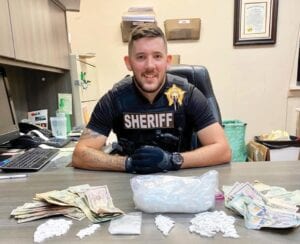 Federal officials have vowed to crack down on opioid abuse here, but court records indicate opiates — pain bills related to morphine, imported synthetics such as fentanyl, and heroin — are not a major part of the drug problem in Letcher County anymore.

A check of court stories this year in The Mountain Eagle show at least 70 people have been charged with either possession of methamphetamines, or trafficking in methamphetamines since January 1.

“Our main issue, like I’ve said from the beginning, it’s 90 percent meth. I still get complaints from people about people selling pills, but it’s not much,” Sheriff Mickey Stines said.

Departments began training officers several years ago to use Narcan, which temporarily counteracts opioids in a person’s body, but Stines said it hasn’t been needed since he became sheriff.

“We’ve been certified since I came into office, and we’ve not used it one time,” he said.

Kentucky State Police Trooper Matt Gayheart, public affairs officer at Post 13 in Hazard, said opioids are still a problem in eastern Kentucky, but methamphetamine has become the first choice for people who use drugs. Trends can change rapidly, and heroin and fentanyl are being seen here, but still in small amounts.

“We definitely still have an opioid problem, not as bad in eastern Ken- tucky maybe as northern Kentucky,” Gayheart said. “Here, meth has taken the front seat.”

Gayheart said there was a string of about a halfdozen overdoses from fentanyl in Perry and Knott counties a few months ago, and troopers still either administer Narcan for opiate overdoses or are present when ambulance crews do. But, he said, is much easier for addicts to overdose on fentanyl because dealers are using it to cut heroin and make it go farther, while still giving users a high. Fentanyl is 50 to 100 times more potent than morphine.

People chose meth because it was homemade and easily accessible, Gayheart said, and when drug cartels began shipping large quantities of laboratory made meth here, the prices dropped and people began switching to it.

The first crime story in The Mountain Eagle that mentioned methamphetamine was in 2007, when Danny Bob Collins of Bottom Fork was arrested for allegedly trafficking in meth after a traffic stop.

Since then, cases have exploded. Meth had already taken hold by 2009, and by 2012 there was an abundance of the drug on the streets of Letcher County, its rise is blamed by some on the success of efforts to curb “doctor shopping,” in which patients would bounce from one doctor to another seeking opioid and anti-anxiety prescriptions, and “pill mills,” pain clinics run by unscrupulous doctors who were actually quasi-legal drug dealers.

Stines said deputies still find pills for sale in Letcher County and in the cars and on the persons of people they arrest, but the pills are most often used to “cut” the methamphetamine by adding crushed pills.