Meth-related arrests are on the rise in Letcher Co. 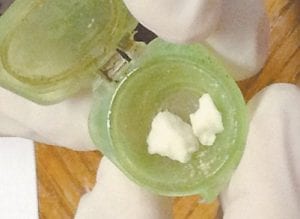 A police officer used gloved hands to show this stash of crystal methamphetamine that was found in a pickup truck in a parking lot at Isom on Jan. 17. Four Letcher County residents were arrested.

Arrests related to methamphetamine have increased recently in Letcher County.

A Whitesburg Rite Aid Pharmacy employee notified police around noon on Jan. 16 that two women were trying to purchase the drug Claritin-D, which pseudoephedrine, a substance used to make methamphetamine.

“A couple of things alerted the pharmacist to contact us,” said Lt. Brian Damron, of the Letcher County Sheriff ’s Department. “Christie Sizemore had shown the pharmacist her ID while her boyfriend Michael Caudill’s ID was on the back of hers so when she showed it to her it was legit, but when she scanned it, it popped up on the computer as her boyfriend’s and she signed her maiden name.”

Christie R. Sizemore, 33, of Redfox, and Chelsea L. Williams, 20, of Blackey, were arrested on Jan. 16 and charged with unlawful possession of a meth precursor (first offense).

“ They gave me a statement that they were purchasing the pseudoephedrine products for a gentleman by the name of Terry Lee Slone,” said Damron.

This is a case where people are paid or given product to go out and buy a regulated amount of pseudoephedrine, Damron said, which can only be purchased at a pharmacy by showing identification and providing a signature.

Sizemore was also charged with first-degree promoting contraband. She was strip searched at the Letcher County Jail because it appeared that she was under the influence of drugs, according to information from a citation.

On Jan. 17, police received a complaint of a pickup truck in the Isom Double Kwik parking lot that had some people who were hiding what appeared to be controlled substances throughout the vehicle, Damron said.

“ There were several people in and around the vehicle and they started to disperse when I got there,” said Damron. “After I talked to everybody there, we subsequently made an arrest on those individuals.”

“(Slone) was standing beside of the back of a pickup truck and had thrown a plastic container containing methamphetamine in the back of the truck,” Damron wrote on a citation. “He was found to be manifestly under the influence and was and was a danger to himself and/or others.”

Slone was strip searched at the jail and was charged with firstdegree promoting contraband after he tried to conceal something in the back of his underwear.

The deputy jailer told Slone to hand him what he had and Slone handed the deputy jailer a small baggie containing a red substance that Slone identified as meth, according to court documents.

Michael Caudill, 35, of Whitesburg; Chris Triplett, 51, of Isom; and Trena Triplett, 20, of Jeremiah, were each arrested and charged with public intoxication of a controlled substance (excludes alcohol).

“(Trena Triplett) was found to be manifestly under the influence and was a danger to herself and/or others when I responded to a complaint at the Isom BP and found a quantity of methamphetamines and other drug paraphernalia of which I believe the above subject had been using,” wrote Damron in a citation.

At Rite Aid, Sizemore had used Caudill’s driver’s license to purchase Claritin-D and Sizemore and Williams had told Damron that they were purchasing Claritin D for Slone, Damron said.

After receiving complaints of a strong smell of meth, law enforcement with the sheriff ’s department and Kentucky State Police recently conducted a search warrant at an Isom residence. A meth cleanup team from Dry Ridge was called to the scene.

“This is a very dangerous substance,” said Damron. “They don’t even know the lasting effects of the exposures.”

Damron warns the public to call police if they come across any meth precursors in secluded areas.

Commonly discarded meth products are bottles with hoses coming out of them, common household cleaning items in coffee filters or bottles with a white substance in it.

Meth labs are subject to explosion, Damron said, and meth can’t enter the body through absorption or inhalation.

The most common meth lab is the one-step method, Damron said.

“It’s not like a giant meth lab,” said Damron. “We’ve found labs in vehicles and backpacks.”