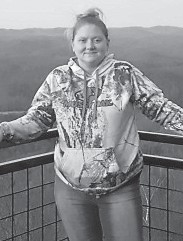 A daughter of Valarie Ann Osborne and the late Michael Edward Osborne, she was born in Whitesburg. She was preceded in death by her grandfathers, Ralph Collier and Charlie Osborne, and two uncles, Roger Howard and Chuck Osborne.

Surviving in addition to her mother are her significant other, Michael “ Biddy” Williams; two daughters, Alexis Paige Brashears and Bailee Summer Brashears, both of Whitesburg; two brothers, Michael Douglas Osborne and wife Crystal of Cowan and James Edward Osborne and wife Molly of Whitco; and two grandmothers, Rosa Lee Collier of Whitesburg and Nola Osborne of Eolia.