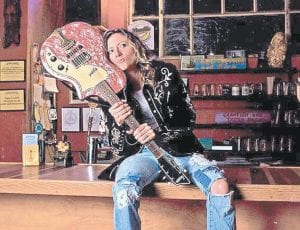 Michelle Malone (above) will perform at Summit City in downtown Whitesburg on Friday, Nov. 13, the night after Foghorn Trio of Portland, Oregon below, performs in the same venue.

“Michelle Malone: How did someone this good stay under the radar for so long?” asked writer Michael Witthaus. “That’s what comes to mind while listening to Debris, Malone’s slide-guitarpunctuated collection of reckless youth, stalkers and one-night stands.”

Witthaus, writing for Hippo, was referring latest album, Debris, which has been nominated for a 2010 Grammy Award. “It’s raw Americana,” Witthaus continues, “a fist-in-the-face retort to the Stones’ Some Girl s, 30 years on.”

Malone will be making her fourth appearance in Whitesburg when she takes the Summit City stage at 9 p.m. on Friday. Admission to the show, which is sandwiched between stops in Asheville, N.C., and Greenville, S.C., is only $8. 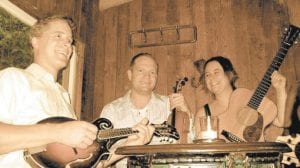 Adds The Village Voice, “Why Michelle Malone hasn’t knocked the likes of Sheryl Crow and Bonnie Raitt off of their roots-rock and blues pedestals blows the mind. Malone’s authentic interpretation of good old Southern rock and hard-edge blues should have her rubbing shoulders with the Allman Brothers and Buddy Guys of the world.”

The Foghorn Trio is Caleb Klauder, Stephen “Sammy” Lind and Nadine Landry. Klauder and Lind have been playing together since 2000 with the Foghorn Stringband and many other musical endeavors including the Caleb Klauder Country Band, the Dirk Powell Band, Balfa Toujours and Going Across the Sea. The Foghorn Trio features Caleb and Sammy trading off on vocals, guitar, mandolin, fiddle and banjo with Nadine on vocals, guitar and upright bass.

The band has performed traditional American Old Time music all over the globe. They have toured extensively throughout the US, the UK, Ireland, Denmark, Sweden and Malaysia; including the Tonder Music Festival, the Newport Folk Festival, the Rainforest World Music Festival, the Chicago Folk and Roots Festival and The Seattle Folk Life Festival.

“Their vocals are simple and honest, with intertwining harmonies similar to the Carter Family and the Stanley Brothers,” writes fiddlefair.com.

Rounding out the week’s performances Saturday will be Hindman, Ky., rockers Soulshine.