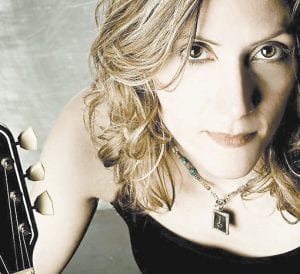 Acclaimed rock and blues musician Michelle Malone will be back in Whitesburg on Saturday, this time while touring to support her new album Day 2, Malone’s 11th studio effort.

Malone’s concerts offer a mix of bottleneck slide guitar, blues harmonica, and trademark vocals that led a New York Times reviewer to label her recently as “the kind of singer and songwriter who can jolt things into overdrive.” She was given the nickname “Moanin’ Michelle Malone” by legendary blues guitarist Albert King.

Malone’s newest album was produced by her friend and Grammy Nominee Shawn Mullins, who says of Malone’s connection to Day 2’s material: “One of the first things I noticed about Michelle in the studio, is how deep she goes into ‘the zone,’ as some folks call it. Most good guitar players, even, find it uncomfortable and sometimes take a while before they find their groove, so to speak. But with Michelle, you just sit back, open your ears, and hold on!”

Malone, who has also been nominated for a Grammy Award, was born in Atlanta, Ga., and grew up listening to her mother sing in the church choir every Sunday. When it came time to craft her own sound, she took those religious roots and blended them with rock and soul. She now lives in a small town in rural Alabama.

Before an appearance in Atlanta earlier this year, Malone told the Atlanta Music Guide the first concert she attended was by the famous punk band The Clash and that she considers her best performance her Fourth of July singing of The National Anthem at an Atlanta Braves baseball game. She told the publication the best concert she has seen to date was Paul McCartney, who “played everything I ever wanted to hear, from my favorite Beatles songs, to Wings, to his solo stuff. Amazing!”

Malone also told the Atlanta Music Guide that her idea of a perfect concert would be one with Mavis Staples, Aretha Franklin, Bonnie Raitt, Neil Young and The Rolling Stones on the bill.

With Malone’s own outstanding abilities and her great taste in the music of others, it’s no wonder the publication Nashville Rage said that Malone “has the soul of a bluesman, the heart of a folk singer, and the guts of a rock and roller all wrapped up in one fiery bad ass.”

If you haven’t seen Malone on one of her previous stops in Whitesburg, you might want to consider what this reviewer on the website Chicagoconcertgoers.com said, “Michelle Malone is my No. 1 concert of 2011. She was a mesmerizing mixture of raging guitar, wailing vocals, and sexual current. It’s one of the best performances I’ve seen in my life.”

Malone is scheduled to perform at Summit City in Whitesburg on December 8 at 8 p.m. For more information, call 633-2715.