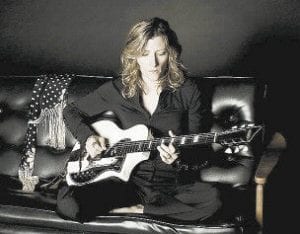 American rock and blues singer/songwriter and guitarist Michelle Malone is the latest highly-acclaimed music star scheduled to perform in Whitesburg.

Armed with a bottleneck slide, blues harmonica, and her signature gut-wrenching vocals, “Moanin’ Michelle Malone,” a nickname given to her by legendary blues guitarist Albert King after hearing her sing, will perform at Summit City on Main Street this Saturday night (April 5) at 9. Admission is $5.

Malone was born in Atlanta, Ga., and grew up listening to her mother sing in the church choir every Sunday. When it came time to craft her own sound, she took those religious roots and blended them with rock and soul.

Her latest album, 2006’s Sugarfoot, has been hailed as “a high-spirited stripped down blend of rootsy acoustic slide, gritty electric blues and explosive vocals… like the lost recordings of Bonnie Raitt and the Rolling Stones meeting up in Susan Tedeschi’s garage for a late night jam session.”

Speaking of the Rolling Stones, Malone frequently covers “Wild Horses” in concert, as well as “Peace Frog” by the Doors.

Malone’s Whitesburg stop is one of about 200 shows she will perform on the road this year. She has shared stages and tours with such blues legends as Albert King, Johnny Winter, Little Feat, ZZ Top , Marsha Ball and Chris Whitley, as well as folk icons Indigo Girls, Shawn Colvin, Jackson Browne and John Mayer.

Malone is said to be able to make an intimate venue like Summit City “feel like the center of the universe.”