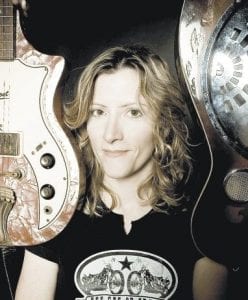 Atlanta native Michelle Malone will be peforming rock and blues music from her acclaimed new album, Debris, at Summit City on Thursday.

Michelle Malone is returning to Whitesburg this week armed with a bottleneck slide guitar, blues harmonica, her signature soulfilled vocals, and a newly-released album, Debris, which is her best yet.

Malone will appear in concert at Summit City on Thursday (June 25). Admission to the all-ages show, which begins at 8 p.m., is $10.

Malone was born in the Deep South and grew up listening to her mother sing in the church choir every Sunday. When it came time to craft her own sound, she took those religious roots and blended them rock, folk, and blues. The result is, Debris, a high-spirited album that is bringing comparisons to recordings by Bonnie Raitt, Lucinda Williams and The Rolling Stones.

Debris, Malone’s 10th release, is easily one of her most revealing and emotional discs. Helping her capture the mood is producer Nick Di Dia, who has done engineering work on recordings by Bruce Springsteen, Pearl Jam, Train, and Matthew Sweet. Says Malone, “Nick is brilliant, and we found that we work very well together. He was able to translate the live grit of ‘Feather In A Hurricane’ and ‘Undertow’ and in the next breath illustrate his sensitivity and finesse on ’14th Street and Mars’ and ‘Debris.’ He let the songs take us where they wanted to go.”

Malone found herself tackling some serious subject matter while at the same time making that spirited soul-shaking music that she loves. She says, “I have to play these songs every night, so I need them to be fun — I want to have a good time, too.” If one line could capture the sentiment of D ebris it would be, “Don’t you think it’s time to let your childhood go?” Malone expounds, “De bris is basically a breakup record about a relationship that had me in a state of arrested development for over a decade. I wrote about the anger, the heartbreak, the humor, and the relief I finally found in the end.”

The names of Michelle Malone’s other nine albums serve

as an autobiography; New Experience,

Relentless, For You Not Them,

Redemption Dream, Beneath the

Out There, Stompin’ Ground, and last year’s critically acclaimed

Sugarfoot. She has been on dozens of “Best Of” lists and won many awards throughout her career including four-time best album (Atlanta magazine, Harp Magazine), two-time best acoustic guitarist (Creative Loafing, IAC), Best Blues Guitarist (IAC.com), and five-time female vocalist of the year (Creative Loafing). She was also recently on the Grammy ballot for Best Contemporary Blues Album.

Living a paraphrased line by one of her inspirations, Tina Turner, Malone has never done anything nice and easy. She bit the major label lure and despite promises broken, indulgences extended and excesses expected, Michelle continued creating solid songs, introspective, energetic and impressive forays into bluesy rock as well as tasty pop nuggets. This wealth of material has enabled Malone, to tour and record for over 20 years, averaging over 200 days a year on the road. Michelle’s live show is not to be missed—she can make the biggest venues seem as cozy as a campfire, and an intimate venue like Summit City feel like the center of the universe.

The Malone show will be one of two live performances at Summit City this week. The Apology from Charleston, W.Va., will be performing rock/metal music on Saturday. Admission to the 8:30 p.m. show is $5.

The Apology formed in 2007. The band’s members cite as influences bands such as Alice in Chains, Collective Soul, Shinedown, Metallica, Godsmack, and Guns ‘N Roses.