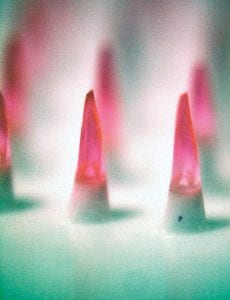 This photo provided by the Nature Publishing Group shows a microscopic image of dissolving microneedles, shown here encapsulating a pink dye to simulate how a vaccine would be incorporated into the needles. Influenza vaccination can be achieved using microneedle-covered-patches applied to the skin as reported this week in Nature Medicine. The study, conducted on mice, found that the microneedle patches were more efficient at clearing the lungs of virus and improved the immune system’s antibody memory. (AP Photo)

One day your annual flu shot could come in the mail.

At least that’s the hope of researchers developing a new method of vaccine delivery that people could even use at home: a patch with microneedles.

That’s right, tiny little needles so small you don’t even feel them. Attached to a patch like a Band-Aid, the little needles barely penetrate the skin before they dissolve and release their vaccine.

Researchers led by Mark Prausnitz of Georgia Institute of Technology reported their research on microneedles this week in Nature Medicine.

The business side of the patch feels like fine sandpaper, he said. In tests of microneedles without vaccine, people rated the discomfort at one-tenth to one-twentieth that of getting a standard injection, he said. Nearly everyone said it was painless.

In the Georgia Tech work, the vaccine is still injected. But the needles are so small that they don’t hurt and it doesn’t take any special training to use this kind of patch.

So two problems are solved right away — fear of needles, and disposal of leftover hypodermic needles.

“The goal has been a means to administer the vaccine that is patient friendly,” Mark R. Prausnitz of Georgia Tech said in a telephone interview.

That means “not only not hurting or looking scary, but that patients could self-administer,” he said, and people would be more likely to get the flu vaccine.

By developing needles that dissolve, there are no leftover sharp needles, especially important for people who might give themselves the vaccine at home, he said.

The patch, which has been tested on mice, was developed in collaboration by researchers at Georgia Tech and Emory University, Prausnitz said. The work was supported by the National Institutes of Health. The researchers are now seeking funds to begin tests in people and, if all goes well, the patch could be in use in five years, he said.

Flu vaccination is recommended for nearly everyone, every year, and that’s a big burden on the public health network, Prausnitz noted. Many people don’t get the shot because it’s inconvenient, but if they could get in mail or at the pharmacy they might do so, he said.

The patch is placed on the skin and left for 5 minutes to 15 minutes, he said. It can remain longer without doing any damage, he said. In tests on mice, the miocroneedles delivered a correct dose of the flu vaccine.

The little needles are 650 microns (three-hundredths of an inch) in length and there are 100 on the patch used in the mouse study.

Asked if the term “microneedle” might still frighten some folks averse to shots, Prausnitz said he was confident that marketers would come up with a better term before any sales began.