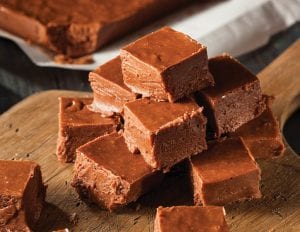 “Microwave Fudge” is good on Mother’s Day and all other days, too.

The arrival of May means Mother’s Day is coming soon, this year on May 14. Like many women, including my sweet mother, I love chocolate. Receiving a gift of my favorite candy — whether it’s homemade or a box of seashell-shaped, hazelnut and chocolate confections — is one of the highlights of my Mother’s Day. It’s not just about the gifts, it’s about taking the time to acknowledge the meaning of motherhood and what your mother means to you.

The recognition of motherhood has its roots in the spring festivals and celebrations of the ancient Romans and Greeks. The tradition continued with the advent of organized churches, and honored Mary, the mother of Christ, during the fourth Sunday of Lent. Later, Mothering Sunday, an English holiday, was created to celebrate all mothers.

The tradition of a special holiday just for mothers began in the United States more than 150 years ago, when Anna Reeves Jarvis began “Mother’s Work Day Clubs” to improve the sanitary conditions to raise awareness about the poor health conditions in Appalachia. During the Civil War, organized clubs in towns in both the North and the South worked to control a typhoid outbreak in Union and Confederate encampments. Later, Reeves also began a “Mothers’ Friendship Day” to reconcile families divided by the Civil War.

In 1872, Julia Ward Howe, author of “The Battle Hymn of the Republic,” began organizing an official mother’s day on June 2 celebrating peace and as a protest against the futility of one mother’s son killing another during the Civil War. This more political observation of mother’s day soon died out.

In 1905, after Anna Reeves Jarvis’ death, her daughter, Anna M. Jarvis, began a campaign to recognize her mother’s work and to honor her memory. Her mother had once said, “I hope and pray that someone, sometime, will found a memorial mother’s day. There are many days for men, but none for mothers.” During a church service in 1908, she began handing out her mother’s favorite flower, a white carnation, and pink or red carnations to honor mothers who were still alive. She also lobbied President Theodore Roosevelt and President William Taft and to start a national holiday.

In 1914, President Woodrow Wilson signed a bill recognizing Mother’s Day as a national holiday. The House of Representatives also adopted a resolution recommending that officials of the federal government wear white carnations on Mother’s Day.

Over the years, Anna M. Jarvis became violently opposed to the commercialization of Mother’s Day. “I wanted it to be a day of sentiment, not profit.” She was arrested for disturbing the peace during a public protest in 1923 and fought to stop the sale of flowers.

While Mother’s Day has become one of the most popular days to send flowers, dine out and make long-distance calls, Anna M. Jarvis’ original mission to honor and recognize the contributions and sacrifices made by mothers should not be forgotten.

Throughout the years, my favorite Mother’s Day gifts have always been the ones that are handwritten and homemade. This recipe for Microwave Fudge is delicious and easy to prepare. It will provide a sweet finish to your Mother’s Day celebration!

1. Butter a square pan
and line with parchment
paper for easy removal of

set fudge. Set aside.
2. In a microwave-safe
2 quart bowl, heat chocolate chips and sweetened
condensed milk on high
for 1 minute. Remove from
microwave. Let sit for 1 minute, then stir for 1 minute
to combine until chocolate
is completely smooth. If
needed, heat an additional
30 seconds. Stir until chips
are completely melted and
chocolate is smooth.
3. Stir in vanilla extract.
Pour fudge into prepared
pan. Let fudge cool for 2
hours at room temperature
or for 1 hour in the refrigerator before cutting into
1-inch squares and placing
in an air-tight container.
4. If giving as a gift, place
fudge in a decorative, airtight container. Fudge does
not need to be kept refrigerated.

.
Angela Shelf Medearis
is an award-winning children’s author, culinary historian and the author of
seven cookbooks. Her new
cookbook is “The Kitchen
Diva’s Diabetic Cookbook.”