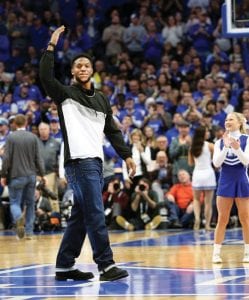 Kentucky linebacker Josh Allen was introduced at the UK-Utah basketball game and got a standing ovation from fans. (Vicky Graff Photo)

Kentucky Radio Network basketball analyst Mike Pratt doesn’t think Quade Green’s transfer last week is something that will wreck the season for coach John Calipari’s team. However, he thinks not having the sophomore point guard might take more time for UK to adjust to than some understand.

“You just don’t change roles, rotations immediately,” Pratt said. “In the long run, the team can overcome this and be fine. In the short run, it may cause some issues.”

Sporting News columnist Mike DeCourcy isn’t ready to concede that Green could not have helped the Cats this year if he had duplicated the way he played last year.

“But I have not seen the same level of confidence or play from him this year,” DeCourcy said. “Making 11 3-point shots — or just over one a game — is not going to change a team. I don’t see him playing at an elite level. He was struggling with his comfort zone. He averaged 2.5 turnovers per game and was just playing about 17 minutes a game. That’s not doing it. He’s not electric enough to make those mistakes and play.

“I just think he did not give it enough time to get better at Kentucky. I believe it would have been a lot better for him to fight through his frustration, help his team win. Then if at the end of the year he saw more guys coming over the horizon, go (transfer) then.”

Kentucky certainly survived its first game without Green and his outside shooting last week because freshman Keldon Johnson, who was just 8-for-25 from 3-point range in the first nine games, went 5-for-6 on 3-point shots — all in the first half of an 88-61 win over Utah. Tyler Herro also hit two 3-pointers as did Jemarl Baker in just two minutes.

Herro, perceived to be UK’s best shooter, has just 14 3-pointers on 50 tries. That’s only a 28 percent mark. DeCourcy says Herro has to “start” making shots or Kentucky is “not winning big games” this season.

“He is a guy that should make shots. I don’t know if his confi- dence is dented or broken. If it is, then it becomes a struggle make shots,” DeCourcy said. “But if he can start making shots, then Keldon (Johnson) can make more.”

That’s because teams are going to do what Utah did unless Johnson goes off for long range again. The Utes gambled that Johnson was more dangerous driving or getting to the foul line than shooting 3-pointers. It backfired on them.

“We were willing to live with some of those 3’s. When you play a team like Kentucky I think with enough different weapons, certainly those guys have it in them do to some different things. We were trying to play the numbers and it didn’t work out in our favor,” Utah coach Larry Krystkowiak said.

Well before Green’s departure, Kentucky was searching for a go-to player. Johnson continues to look like it could be him, something he would not mind.

“Definitely, I’m comfortable with the offense going through me. I know every night may not be my night. However, I think that I can make the right play and get my teammates involved,” Johnson said after the Utah win.

Kentucky was a consensus top five team going into the season. Now at 8-2 going into Saturday’s game with North Carolina, which beat Gonzaga 103-90 last week, and only in the top 20. DeCourcy believes the Cats have under performed to this point but says thinking the problems cannot be fixed is foolish.

Last week’s transfer by sophomore point guard Quade Green made me think back to the 1977- 78 national championship season when senior James Lee almost quit the team.

“Coach (Joe) Hall, 40 years ago was probably the toughest, meanest coach ever. I look back now and he has developed a bunch of great men,” Lee said. “We took the lessons and developed into some pretty nice guys. We have all been pretty successful and grown to be pretty good guys. Coach Hall and staff did great job dealing with us. We needed to be yelled at a few times.”

Hall was known for tough — maybe even brutal — practices. During one of those practices, Lee admitted he just “decided to walk off the court and leave” and go visit his parents, who lived in Lexington.

“I got home and my father, who was a Baptist minister, was never there. But he pulled his car into the end of the driveway. I had to park across the street, walk over and he was on the porch waiting for me,” Lee said. “He said, ‘Where are you going?’ I told him I was going in the house and he said I was not and asked why I was not at practice.

“I told him I had a little altercation (with Hall). I’ll never forget that he told me, ‘I understand you signed a four-year scholarship and you are not finished with your commitment and until that happens you are not allowed in his house. So I just tucked my head between my tail, got back in the car, drove back, got dressed, came back into practice and apologized.”

Lee still isn’t sure who apparently called his father to tell him he left practice.

“I just wanted to see my mother and knew she would give me some encouragement, but I got a different version from my father,” Lee said. “After that me and my father never discussed it. I never asked him who called him. I know somebody did. I just don’t know who and guess I never will.”

Penn State quarterback Trace McSorley really had no reason to know much about Kentucky when the teams were matched to play in the Citrus Bowl Jan. 1. However, McSorley had already heard plenty about Kentucky running back Benny Snell when the bowl pairings were set.

He also knew that Kentucky going 9-3 was not the normal year for UK football.

“They made a lot of noise this year. It’s not something that people expected out of them but they’ve got a ton of great playmakers, especially on the defensive side of the ball that can get after the passer and make plays in the run game and make life difficult for an offense,” McSorley said showing he also knows plenty about national defensive player of the year Josh Allen.

Kentucky’s defense probably has learned a lot about McSorley, too, since the matchup was set. He’s thrown for 2,284 yards and 16 touchdowns this year with just six interception but has also rushed for 11 touchdowns. Twice he had 100-yard rushing games.

Penn State coach James Franklin, the former head coach at Vanderbilt, certainly has been impressed by UK consensus All- American linebacker Josh Allen. Franklin even has joked that he sent Allen a direct message on Twitter that he “may want to save yourself for the (NFL) draft” rather than play in the Citrus Bowl.

“I think the biggest thing is his length and his athleticism and how twitchy he is. Obviously when you’re considered the best defensive player in college football, the way he’s been able to impact the game in so many different ways, that’s probably what’s been so impressive. How twitchy he is, how productive he is, his length,” Franklin said.

The Penn State coach said Allen, who is projected to be a top 10 pick in the 2019 NFL draft, “fits the model” for the NFL. We have a lot of discussions in recruiting and with some of our own players that say,‘am I a 3-4 outside linebacker at the next level?’ because some guys may be undersized. This guy is 260 pounds. I think, like anything, you’re always looking for the biggest, the strongest, the most athletic guys that you can use in a variety of different ways. I think he’s a really good example of that.”

So what issues will he cause for Penn State’s offense and how can Penn State limit his effectiveness, something few teams have been able to do this season?

Obviously the chess match, like always, is they’re trying defensively to put him in situations to make plays, and we’re trying to do the same thing formationally. How can we do things formationally to limit his impact?” Franklin said. “Same thing from a scheme standpoint. Obviously, we better have an awareness of where he is on every single play. That’s the chess match constantly. What can we do with some motions, things like that, to limit his impact?”

Kentucky senior Maci Morris knows her days on campus will be over soon. “It has not really hit me that this will end soon and then people are talking about my last this and that. So it is kind of shocking at times,” Morris said.

It might even be more shocking when she has to enter the work force just like it was for most of us.

“Starting a new chapter in life will be interesting. At some point I do want to start a family. I’m going to put that off as long as I can,” she said. “I am 22 years old now. I have time.”

What will she do when basketball does end?

“I want to be a physician’s assistant. I got to shadow some doctors at UK (last summer) and really enjoyed that. I don’t know where I will go. Stay in Kentucky, move somewhere. Wherever God leads is where I will go,” she said.

Morris predicted going into the season that UK would be better because the returning players had all matured and “grown a lot from what we went through last season.” She also felt freshmen Rhyne Howard and Blair Green would be valuable additions immediately — and both have been.

Quote of the Week: “Coming in Rupp and seeing the fans, seeing the atmosphere that these guys get to play at when they’re playing at home. It was pretty cool. I’ve seen it on TV for years growing up, so it was an awesome experience. You want to come in here and have a great game. It’s one of those games you mark on your schedule,” Utah guard Sedrick Barefield on getting to play at Rupp Arena.