Mild weather is expected to continue into February 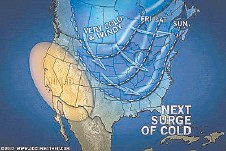 This map provided by AccuWeather show what lies ahead for the end of the week. Still, mild weather is expected to return.

Highs of 64.5 and 56.3 degrees on Monday and Tuesday helped lift the average temperature for the first three weeks of January in Letcher County to a very mild 39.2 degrees, but somewhat colder weather was expected to return to the area beginning Friday.

According to Kentucky Mesonet’s new weather station in Whitesburg, the high temperature for the first 23 days of January averaged 50.1 degrees while the low averaged 28.3. A total of only 2.2 inches of snow fell on the county during the same period.

Meanwhile, forecasters at AccuWeather expect Friday’s high temperature in Letcher County to be only 43 degrees after reaching 60 degrees on Thursday. Highs in the mid- to low 40s are expected for Saturday, Sunday and Monday. The low temperature forecast for Sunday night is 18 degrees.

AccuWeather also reports that while the air over much of the U.S. will bring above- normal temperature levels into February, signs continue to point toward additional cold waves in the north-central and northeastern U.S., as well as the opportunity for more storms in general during the coming month.

According to Accu- Weather long range weather expert Paul Pastelok, “The higher amplitude jet stream pattern expected to develop over the next couple of weeks will result in more temperature extremes from one part of the nation versus the other.”