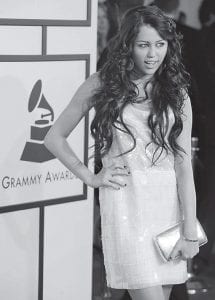 Miley Cyrus was photographed arriving at the 50th Annual Grammy Awards in this Feb. 10 photo. Billy Ray Cyrus says he and his daughter, the “Hannah Montana” actress Miley Cyrus, simply forgot to buckle up for one of their scenes in their new hit movie. (AP Photo)

When Consumer Reports posted a blog two weeks ago criticizing Miley Cyrus for not wearing her seat belt in a new film, Hannah Montana Nation rallied in her defense.

Before long, the posting had received nearly 200 comments (far more than the typical one or two) – and made national news.

“Absolutely we were caught off-guard,” said Don Mays, who wrote the post. “Whether people agree or not with our analysis, at the very least, I would like them to understand the risk.”

But anyone looking for car safety tips from Hollywood would be advised to avoid most movies. Immediately, one might write off the work of Bruce Willis, Steve McQueen and Burt Reynolds – not to mention avoid “Thelma & Louise” entirely.

Even aside from Hollywood’s propensity for road rage, movies generally don’t portray seat-belt usage. A study in 2001 found that only 30 percent of movies showed seat belts buckled.

Was Cyrus singled out?

“Absolutely,” said Heather A. Jacobsen, a professor at the Saint Louis University School of Public Health and lead investigator of the 2001 study. “It is the norm for characters in movies to not wear a seat belt.”

In her new 3-D Disney concert film “Hannah Montana & Miley Cyrus: Best of Both Worlds Concert,” the actress and her father, Billy Ray Cyrus, are seen riding, not bucked up, in the back seat of a Range Rover.

Mays’ post criticized Cyrus for not buckling up and thereby influencing her legion of young followers. It had a snarky title, too: “Note to Hannah Montana: Seat belts are necessary not an accessory.”

Billy Ray Cyrus subsequently apologized: “We made a mistake and forgot to buckle our seat belts.”

Mays said that Cyrus has a greater responsibility to her impressionable fans. To explain the issue’s seriousness, he cited statistics from the National Highway Traffic Safety Administration that people were not wearing their belts in 55 percent of passenger vehicle fatalities in 2006.

The effects of sex and violence in films, of course, have been an issue of debate for de- cades. The closer parallel, though, might be smoking.

Smoking on television and in movies has declined over the years, partly thanks to campaigns to drive it off screen. Just last week, the New York state Health Department took out full page ads in The New York Times and The Wall Street Journal encouraging the movie industry to give movies with smoking an R-rating.

According to the Motion Picture Association of America rating board, the percentage of films that included smoking dropped from 60 percent to 52 percent from July 2004 to July 2006.

But the romantic portrayals of smoking (think Humphrey Bogart lighting Lauren Bacall’s cigarette) don’t exactly compare to the more utilitarian buckling up. No protagonist ever got the girl by flaunting state seat belt laws.

“It’s not so much that people mimicked the behavior, but because films established that behavior as very normal and something

everybody did,” said Jacobsen.

That is out of line with the pattern of seat-belt usage by the public, which Jacobsen’s study counted as about 70 percent. (In many states, it’s the law to buckle up.) The reason for the discrepancy may be suggested in Billy Ray Cyrus’ explanation.

“We got caught up in the moment of filming,” said the country music star.

Family films typically give seat belts more attention. In 1995’s “Toy Story,” for example, even Buzz Lightyear buckles up with a belt nearly as big as he is. A 1997 study by Michigan State University found that one of the most seat belt-friendly movies was “Dead Man Walking” (1995), which depicts buckledup drivers in five of the film’s six driving scenes.

So how far should movies go in putting forth images of health and safety?

“People may want to see more vegetables in film and less fast food. Less soda, and more milk or juice,” said Jacobsen. “There are any number of health issues whose agendas can be set forth through movies.”

Robert Thompson, professor of television and popular culture at Syracuse University, believes safety and health advocates have every right to raise awareness for an issue by criticizing films or TV shows. But he thinks concerns over seat belt use should stick to reality and keep out of fiction.

“If you’re going to start strapping any storyteller, whether it be a movie or a television show or a novel with only behavior that’s good and healthy role-modeling behavior,” said Thompson, “then we’re in really big trouble.”