Miley steps from behind ‘Hannah’ 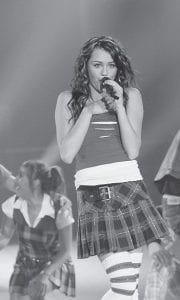 Miley Cyrus is shown during a scene from her new movie, “Hannah Montana & Miley Cyrus: Best of Both Worlds Concert.” (AP Photo/ Disney)

Hannah Montana may be the most potent phenomenon in Hollywood right now — bigger than Batman, bigger than Brangelina. Yet these days, the girl who truly fascinates is not Hannah, but Miley Cyrus.

The 15-year-old face of the billion-dollar Disney franchise is no longer a star for just the tween set: She’s intriguing people who turn the pages of Seventeen magazine, as well as Us Weekly and Vanity Fair (more on THAT later). While “Hannah” is still very much a part of Miley, it does not solely define the singer/actress.

But there’s no blonde wig to be found on the cover of this CD. Instead, there’s a more mature sound that’s already finding an older audience. The CD’s first single, the rocker “7 Things,” is now No. 9 on Billboard’s Hot 100 chart) and marks her biggest success in translating her music beyond the Radio Disney audience.

“To be played on these radio stations is awesome, to be able to rock out to it in your car without planning it, without it being just a kids channel,” says Miley, who with her deep voice and selfassured manner seems a decade older that 15.

“(I’m) making it a little more fun and edgy, and I think being able to step out of the ‘Hannah Montana’ thing — not in a way where I’m forgetting her completely, but as my fans grow up, me growing up too and kind of having my own person.”

The “Hannah Montana thing” is familiar to millions of kids and adults alike. A movie is due out next year, the third season of the kitschy TV show starts filming in weeks, and the DVD of the blockbuster “Hannah Montana/ Miley Cyrus: Best of Both Worlds” tour, which wrapped up earlier this year, is a lock to top the charts when it debuts later this summer.

But navigating her own celebrity path outside the confines of famous character has proven to be difficult. With former teen phenoms like Lindsay Lohan and Britney Spears providing epic examples of bad behavior, and the nude photo scandal involving Disney “High School Musical” star Vanessa Hudgens, tabloids have been eager to document a Miley implosion.

The first signs of potential concern came in the form of personal pictures that made their way onto the Internet, showing Miley dressed provocatively (though not obscenely) and setting the blogosphere abuzz.

A more serious firestorm erupted in April when Vanity Fair published a photo of Miley wrapped in a sheet, showing her bare back and shoulders. The photo caused such outrage that no less than The New York Times chronicled the controversy, and Miley and her father, country star Billy Ray Cyrus, said they regretted the result of the photo shoot. They also said she was never topless, as the photo by the esteemed Annie Leibovitz suggested.

But Miley has learned she doesn’t even have to bare a shoulder to cause a fuss — as when she revealed in an interview earlier this month that “Sex and the City” was one of her favorite shows.

“It just scared people because there was the word ‘sex’ in the title, you know what I mean?” says Miley, brushing off her critics.

“Just because that’s what the show is about that doesn’t mean I’m doing that … you don’t all the sudden become the character that you watch,” she adds (though looking very Carrie Bradshaw-ish in a long flowing blue bohemian dress, her hair cascading down her shoulders, with a Chanel bag close to her side).

While allowing that she’s made “mistakes,” she also feels that the media has been unforgiving in their scrutiny at times — and a bit unwilling to see that she’s not a little kid anymore.

“It’s kind of hard to let someone that was so young when they started kind of grow up,” reasons Miley, who was 13 when she debuted in the role. “You just have to realize that people make mistakes and that makes you almost a little more relatable.”

“I don’t think she’s really done anything scathingly wrong, but I think there’s a lot of people selling a lot of magazines following her around, making her into the next somebody, and I don’t think that’s fair — she’s not the next anybody as far as I can see,” he says.

He adds that he’s seen a significant growth in Miley in just the past year: “The difference between being a 14-year-old and a 15-year-old in any tween or teenager’s life is an extraordinary amount — it’s like dog years.”

Much of that growth is reflected on her new CD. While she co-wrote a majority of the songs on the “Meet Miley Cyrus” half of the last record, on “Breakout,” her songs have a weightier tone, discussing the environment, breakups and relationships.

“She always reached the adult audience, because she always reached moms. It’s just in a way that radio finally started to acknowledge,” says Sean Ross of Edison Media Research, which tracks the radio industry. “‘7 Things,’ … has a little bit of an Avril Lavigne-thing going; it sounds like an adult record.”

“There are lots of people who wouldn’t necessarily wanna buy or listen to a ‘Hannah Montana’ record because of their predisposition to the Disney television character,” says Lind. “But if you listen to this record as an artist, the quality of her voice, the quality of her writing, and the quality of the production, I hope, as she does, that it will be taken seriously by (an) older music audience.”

“I hope I get respected a little bit more as a writer,” says Miley. “I want them to respect me and know that I have a lot to say, I have a lot for the world to know and take away from what my life experiences have been.”

She’s also hoping to show more of those life experiences in her acting. She’s like to do some independent films and play gritty characters: “I do wanna, like, showcase a little more of what I can do, and also some different situations … I would like to do something that was a little more deep.”

She’s even hoping to add a little bit more of an edge to “Hannah” next season.

“There’s some things that I want to reinvent with her look, and not make it all sparkles and butterflies, you know? Some stars, and some black rock ‘n’ roll stuff,” she says. “I did want it to grow up a little bit.”

But lest anyone fear that she’s growing up a bit too much, she’s quick to point out that’s she hasn’t grown out of “Hannah.”

“I probably won’t tour again as a ‘Hannah Montana’ tour … I’m kind of past that stuff. But I definitely wanna keep doing my show. I love doing (it) and I wouldn’t wanna give it up quite yet.”