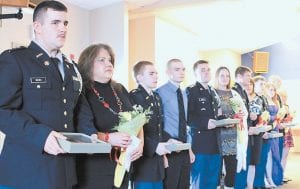 — The Letcher County Central JROTC honored its cadets on April 18 at a military ball held at the Letcher County Extension Office. Approximately 130 people participated in the awards ceremony and meal followed by the ball. The 11 seniors were honored for their years of dedication and service to both the school and the community. Guest speakers included Letcher County Circuit Judge Sam Wright, Commonwealth’s Attorney Edison Banks, Ann Reynolds of the Daughters of the American Revolution, and Sergeant Major (Ret.) Gerald Hacker. JROTC instructors 1SG (Ret.) Wayne Watts and SFC (Ret.) Michael Sexton expressed gratitude to the cadets, their parents and the volunteers who helped make this a successful year.