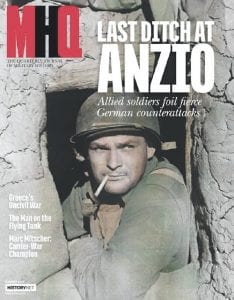 Carl Eugene Gallion Sr., a World War II veteran from Jenkins, was honored recently when an iconic photo of him appeared on the cover of the summer edition of “The Quarterly Journal of Military History,” a magazine published by HistoryNet. The original photo of Gallion was taken by famous Life magazine photographer George Silk and appeared in the April 1, 1944 edition of Life. It was one of the earliest photos taken by Silk, who earned much praise for his work in documenting World War II after joining Life in 1943. Silk died in 2004 at age 87. Gallion is currently a patient in the rehabilitation unit of Letcher Manor in Whitesburg. The February 18, 1943 edition of The Mountain Eagle carried news of the induction into the armed forces by Gallion and 131 other Letcher County men. Gallion reported to Infantry RTC Camp Walters, Texas on March 1, 1943. Gallion is seen in the photo having a cigarette while peering out of his foxhole to enjoy a rare bit of sunshine during a lull in the battle for Anzio, a port town in Italy.